A Theory of Urbanity
The Economic and Civic Culture of Cities 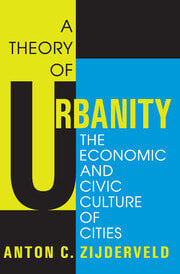 A Theory of Urbanity: The Economic and Civic Culture of Cities

Cities provide for people, not just functionally in terms of jobs, obligations and practical pursuits, but also, and above all, emotionally. We like some cities and detest others. Despite shared rationalizations and common modes of administration and design, each city has its own culture. A culture is typically human in that it contains all dimensions of the human, personal condition--from the lowest to the most sublime. Urban culture comprises both economic and civic culture, and is the source of a city's vitality. For today's urban sprawls, which have a weak and failing economic and civic culture, the task of the urban administration and various economic and civic organizations is to strengthen conditions that can prevent the emergence of urban anomie. With suburbanization, the edge city, and the emergence of cyberspace, some argue that cities, as integrated places of working and living, are things of the past. Zijderveld argues that people are and remain social animals, who like and need one another's company, particularly in their economic, socio-cultural, and political activities. Throughout the ages, cities have provided the environment in which people fulfill these needs. Anton Zijderveld discusses urban preferences, the organizations and ramifications of urbanity, the modernization of urban culture, the uneasy alliance between urbanity and the interventionist state, and the cultural dimensions of urban renewal.

Zijderveld sees the economic and civic culture of the city as the centerpiece of contemporary urban management and contemporary urban democracy. In this sense, the new technology is an ally of the new urban renewal. Most postmodern treatises on the end of the city are impressionistic and unsystematic. In contrast, Zijderveld puts the qualitative dimensions of city life into focus, catching its pulse and cultural rhythms in a systematic context that prior studies have lacked. As such, it will be of great interest to urban administrators, planning experts, and students of urban studies.