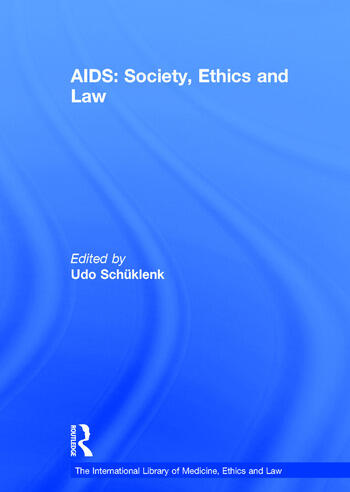 This volume features a collection of the most important articles on the social, ethical and legal implications of a variety of problems caused by AIDS. The wide range of articles selected for inclusion were chosen on the basis of three criteria: their theoretical depth and coherence, their impact on the subsequent debate and on the social and ethical relevance of the problems addressed. Sections in the book include: physicians and patients, AIDS and the law, HIV testing, clinical research in developed countries, clinical research in developing countries and dying with dignity

’This is a good sampling of articles out [of] the thousands that have been published...It is recommended for academic, research and health science libraries.’ AIDS Book Review Journal ’...this volume is a helpful and valuable tool for everyone who wants to get the general idea of the biomedical debates concerning AIDS and does not want to lose track of the ongoing discussions which are spread over so many journals and volumes.’ Medicine, Health Care and Philosophy