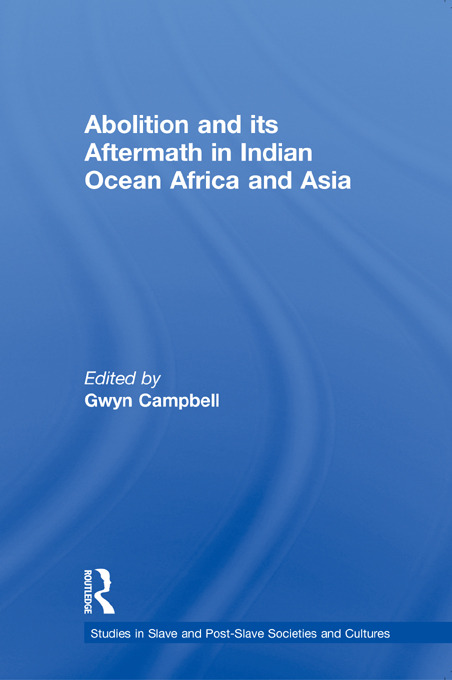 Abolition and Its Aftermath in the Indian Ocean Africa and Asia

This important collection of essays examines the history and impact of the abolition of the slave trade and slavery in the Indian Ocean World, a region stretching from Southern and Eastern Africa to the Middle East, India, Southeast Asia and the Far East.

Slavery studies have traditionally concentrated on the Atlantic slave trade and slavery in the Americas. In comparison, the Indian Ocean World slave trade has been little explored, although it started some 3,500 years before the Atlantic slave trade and persists to the present day. This volume, which follows a collection of essays The Structure of Slavery in Indian Ocean Africa and Asia (Frank Cass, 2004), examines the various abolitionist impulses, indigenous and European, in the Indian Ocean World during the nineteenth and twentieth centuries. It assesses their efficacy within a context of a growing demand for labour resulting from an expanding international economy and European colonisation.

The essays show that in applying definitions of slavery derived from the American model, European agents in the region failed to detect or deliberately ignored other forms of slavery, and as a result the abolitionist impulse was only partly successful with the slave trade still continuing today in many parts of the Indian Ocean World.

"Research on the slave trade and its abolition in the Indian Ocean world of Africa and Asia remains slight in comparison to examination of the Atlantic slave trade. In this work, Campbell (history, McGill U., Canada) presents 12 history essays that go some small ways towards filling this gap. The geographic scope includes Mauritius, Madagascar, Somalia, Iran, Saudi Arabia, India, and the Philippines and the issues discussed include the relationship of movements towards abolition to such factors as: the growth of international industrialization, demographic labor trends, indigenous resistance to slavery, slave runaways and revolts, Western influences, and other sources of unfree labor such as penal labor and indentured servitude." --Reference & Research Book News

1. Introduction Gwyn Campbell, McGill University 2. Indian Ocean Slavery and its Demise in the Cape Colony Nigel Worden, University of Cape Town 3. The Bel Ombre Rebellion: Indian Convicts in Mauritius, 1815-53 Clare Anderson, University of Leicester 4. Abolition and its Aftermath in Madagascar, 1877-1949 Gwyn Campbell, McGill University 5. Abolition and its Impact on the Benadir Coast Omar Eno, York University 6. Slavery and the Slave Trade in Saudi Arabia and the Persian Gulf States, 1920s-1960s Suzanne Miers, Ohio University 7. The "Shari'a and the Anti-Slave Trade "Farman" of 1848 in Iran Behnaz Mirzai, York University 8. The Slave Trade and its Fallout in the Persian Gulf Abdul Sheriff, Advisor, Zanzibar Museums 9.Abolition by Denial? Slavery in South Asia after 1843 Indrani Chatterjee, Rutgers University 10. Plantation Labour in the Brahmapura Valley: Regional Enclaves in a Colonial Context, 1881-1921 Keya Dasgupta, CSSSC, Calcutta 11. Colonialism, Nationalism and the Meaning of Slavery: the Genealogy of "an Insult to the American Government and to the Filipino People" Michael Salman, UCLA 12. Islamic Attitudes towards the Abolition of the Slave Trade and Slavery in the Indian Ocean, c1800-c1940 W.G. Clarence Smith, SOAS 13. The Emancipation of Slaves in the Indian Ocean Martin Klein, University of Toronto

Gwyn Campbell is a History Professor at McGill University. He initiated the series of Avignon conferences on Slavery and Forced Labour and has published widely on slavery, the slave trade and other aspects of forced labour including The Structure of Slavery in Indian Ocean Africa and Asia (Frank Cass, 2004).

Routledge Studies in Slave and Post-Slave Societies and Cultures