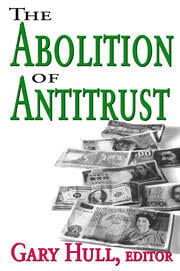 The Abolition of Antitrust asserts that antitrust laws-on economic, legal, and moral grounds-are bad, and provides convincing evidence supporting arguments for their total abolition. Every year, new antitrust prosecutions arise in the U.S. courts, as in the cases against 3M and Visa/MasterCard, as well as a number of ongoing antitrust cases, such as those involving Microsoft and college football's use of the Bowl Championship Series (BCS). Gary Hull and the contributing authors show that these cases-as well as the Sherman Antitrust Act itself-are based on an erroneous interpretation of the history of American business, premised on bad economics. They equivocate between economic and political power-the power to produce versus the power to use physical force. For Hull, antitrust prosecutions are based on a horrible moral inversion: that it is acceptable to sacrifi ce America's best producers. The contributors explain how key antitrust ideas, for instance, "monopoly," "restraint of trade," and "anticompetitive behavior," have been used to justify prosecution, and then make clear why those ideas are false. They sketch the historical, legal, economic, and moral reasoning that gave rise to the passage and growth of antitrust legislation. All of the theoretical points in this volume are woven around a number of fascinating cases, both historical and current-including the Charles River Bridge, Alcoa, General Electric, and Kellogg/General Mills. Designed for the uninformed but educated layman, The Abolition of Antitrust makes positive arguments in defense of wealth creation, business, and profi t, explains the proper role of government, and offers a rational view of the meaning of contract and economic freedom. AldineTransaction www.transactionpub.com ISBN: 978-1-4128-0502-5 Library of Congress: 2004058124 Printed in the U.S.A. Cover design by Ellen F. Kane "The essays in this book present a sustained economic, historical, moral, and legal broadside against the various federal statutes known as antitrust doctrine. They explode the cherished myths underlying the antitrust laws, and expose their intellectual fountainhead in a morality of self-sacrifice that is incompatible with individual rights, free enterprise, and objective law. With the publication of this text, businessmen, lawyers, economists, policymakers,legislators, and judges finally have access to a systemic critique of the antitrust laws. From here on, if antitrust continues to violate the rights of businessmen and to ravage the American economy, it is not for lack of knowing how and why."-Adam Mossoff, assistant professor of law, Michigan State University College of Law.