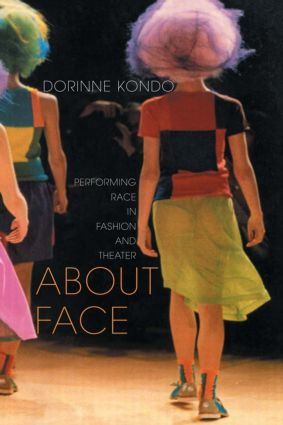 From the runways of Paris to the casting controversies over BMiss Saigon, from a local demonstration at the Claremont Colleges in California to the gender-blending of BM. Butterfly, BAbout Face examines representations of Asia and their reverberations in both Asia and Asian American lives. Japanese high fashion and Asian American theater become points of entry into the politics of pleasure, the performance of racial identities, and the possibility of political intervention in commodity capitalism. Based on Kondo's fieldwork, this interdisciplinary work brings together essays, interviews with designer Rei Kawakubo of Comme des Garcons and playwright David Henry Hwang, and "personal" vignettes in its exploration of counter-Orientalisms.

"Kondo's book is dense, absorbing and challenging; Kondo's intellect and passion permeate the work and will cause a reader to question the semiotics of race and fashion in both American culture and theatre." -- Theatre History Studies

"…Ms. Kondo's style of writing and vocabulary will provide food for thought." -- Education About Asia

"About Face is a dynamic and exciting book, one that addresses issues and takes positions that few in the field of Asian studies have yet to engage… Much in this book is well grounded in traditional methodologies (interview, historical, and textual analysis) and the importance of identity and performance for today's world of global and transnationalist capitalism should be beyond question." -- Journal of Asian Studies

"… recommend[ed] … for a class in either ethnic studies, Asian cultural studies or even fashion … These essays give the reader insight into an Asian American woman's perception of commonly held Asian stereotypes that can be illuminating to the student of Asian culture." -- Education About Asia

Dorinne Kondo is an anthropologist and feminist scholar at Pomona College, and the author of Crafting Ourselves: Power, Gender and Discourses of Identity in a Japanese Workplace. She was a dramaturge on the world premiere of Anna Deavere Smith's play Twilight: Los Angeles 1992 at the Mark Taper Forum in Los Angeles and was represented as a character in Twilight at the New York Shakespeare festivala and at the Cort Theater on Broadway. She is also an aspiring playwright.