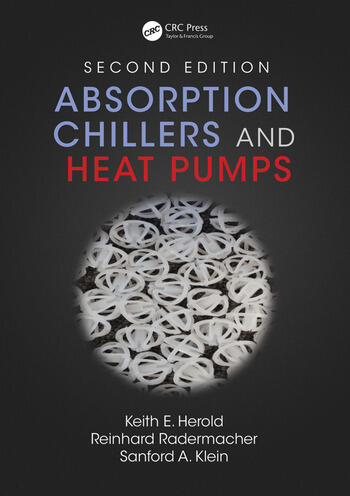 Significantly revised and updated since its first publication in 1996, Absorption Chillers and Heat Pumps, Second Edition discusses the fundamental physics and major applications of absorption chillers. While the popularity of absorption chillers began to dwindle in the United States in the late 1990’s, a shift towards sustainability, green buildings and the use of renewable energy has brought about a renewed interest in absorption heat pump technology. In contrast, absorption chillers captured a large market share in Asia in the same time frame due to relative costs of gas and electricity. In addition to providing an in-depth discussion of fundamental concepts related to absorption refrigeration technology, this book provides detailed modeling of a broad range of simple and advanced cycles as well as a discussion of applications.

New to the Second Edition:

provides an updated and thorough discussion of the physics and applications of absorption chillers and heat pumps. An in-depth guide to evaluating and simulating absorption systems, this revised edition provides significantly increased consistency and clarity in both the text and the worked examples. The introduction of the vapor surfactant theory is a major new component of the book. This definitive work serves as a resource for both the newcomer and seasoned professional in the field.

Keith E. Herold started working in absorption refrigeration during his PhD studies at The Ohio State University, Columbus. This research focus was motivated by his work at Battelle Memorial Institute, Columbus, Ohio, where he was involved in building and running custom absorption refrigeration cycles under contract to the US Department of Energy, among others. Subsequent to those experiences, he joined the University of Maryland, College Park, where he was the director of the Sorption Systems Consortium, which was funded by various companies. Dr. Herold has authored approximately 50 publications on the subject of absorption refrigeration and his group developed the vapor surfactant theory of mass transfer enhancement.

holds a diploma and PhD in physics from the Technical University of Munich, Germany, and conducts research in heat transfer and working fluids for energy conversion systems—in particular, heat pumps, air conditioners, refrigeration systems, and integrated cooling heating and power systems. His work resulted in nearly 400 publications, as well as numerous invention records and patents. He has coauthored three books on absorption and vapor compression heat pumps. His research includes the development of software for the design and optimization of heat pumps and air conditioners, which is now in use at more than 60 companies worldwide.

is an Emeritus Professor of mechanical engineering at the University of Wisconsin–Madison. He received his PhD in chemical engineering at the University of Wisconsin–Madison in 1976, and has been a faculty member since 1977. He is the author or coauthor of more than 160 publications relating to energy systems. Professor Klein’s current research interests are in thermodynamics, refrigeration, and solar energy applications. In addition, he has been actively involved in the development of engineering computer tools for both instruction and research and the author of the EES program.

"There are a number of published books on the technologies of refrigeration and heat pump[s] but most of them focus on compression refrigeration/heat pump cycles. To my knowledge, the book Absorption Chillers and Heat Pumps is the most comprehensive in covering all [of] the essential knowledge in the areas of absorption chillers and heat pumps. These include fundamentals, working fluid selections, single and double stage absorption systems, applications and modellings."
—Dr. Yunting Ge, Brunel University London, UK