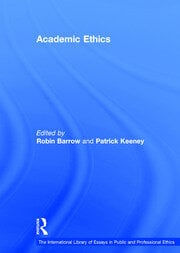 Academic ethics are currently much in the news but there is a great deal of uncertainty, both as to what constitutes specifically academic ethics and about a number of issues that are taken to be issues of academic ethics. This collection of papers focuses on both questions, moving from consideration of the very idea of a University and what that entails, via attempts to locate the major current concerns, to particular issues relating to the University's relations with the corporate world, the professor's role, relations between student and teacher, credentialling, the demands of collegiality and plagiarism. The editors have provided both a full and reasoned introduction and a critical end-piece that attempt to bring some order to the often inchoate nature of this field, raising the further question of whether institutions should, or should not, frame formal codes of conduct. The selected papers are drawn from diverse sources and together provide one of the first comprehensive overviews of academic ethics.

Robin Barrow is Professor in the Faculty of Education at Simon Fraser University, British Columbia, Canada.