Accounting for Ethnic and Racial Diversity
The Challenge of Enumeration 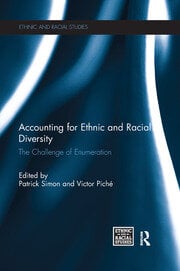 Accounting for Ethnic and Racial Diversity: The Challenge of Enumeration

By the end of the 20th century, the ethnic question had resurfaced in public debate. Every country had been affected by what is commonly known as cultural pluralism, as a result of conflicts interpreted from an ethnic perspective, for instance, in the Balkans and central Africa; nationalist struggles, such as the Basque country, Quebec and Belgium; and demands for recognition and political representation by new ethnic minorities.

This resurgence or extension of the salience of ethnicity in most of the societies around the world can now be found not only in public discourse, policy making, scientific literature and popular representation, but also in the pivotal realm of statistics. This volume explores the ethnic and racial classification in official statistics as a reflection of the representations of population, and as an interpretation of social dynamics through a different lens. Spanning all continents, a wide range of international authors discuss how ethnic and racial classifications are built, their (lack of) accuracy and their contribution to the representation of ethnic and racial diversity of multicultural societies.

1. Accounting for ethnic and racial diversity: the challenge of enumeration Patrick Simon and Victor Piché  2. Collecting ethnic statistics in Europe: a review Patrick Simon  3. Group self-determination, individual rights, or social inclusion? Competing frames for ethnic counting in Hungary Andrea Krizsán  4. Making (mixed-)race: census politics and the emergence of multiracial multiculturalism in the United States, Great Britain and Canada Debra Thompson  5. Re-making the majority? Ethnic New Zealanders in the 2006 census Tahu Kukutai and Robert Didham  6. Used for ill; used for good: a century of collecting data on race in South Africa Tom A. Moultrie and Rob E. Dorrington  7. Brazil in black and white? Race categories, the census, and the study of inequality Mara Loveman, Jeronimo O. Muniz and Stanley R. Bailey  8. Capturing complexity in the United States: which aspects of race matter and when? Aliya Saperstein

is Director of Research at the Institut National des Études Démographiques in Paris, France. His research interests include international migration and minorities. Previous publications include International Migrations in Europe : New trends, new methods of analysis (2008).

is Associate Researcher and Hans & Tamar Oppenheimer Chair on International Public Law at McGill University, Montreal, Canada. He specialises in the field of international migration, and has directed a study for UNESCO on the obstacles to ratification of the ICRMW (UN Convention on Migrant Workers' Rights) in Canada.