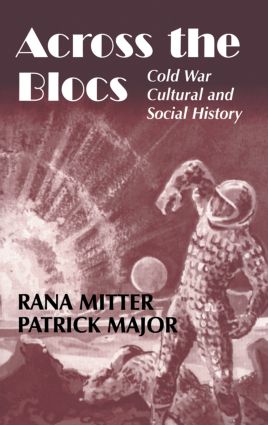 This book asks the reader to reassess the Cold War not just as superpower conflict and high diplomacy, but as social and cultural history. It makes cross-cultural comparisons of the socio cultural aspects of the Cold War across the East/West block divide, dealing with issues including broadcasting, public opinion, and the production and consumption of popular culture.

'Historical science would do well to emphasize the status of ther east-West conflict as a struggle for cultural meaning - as a 'war of intellects'. This book helps that process.'

1. East is East and West is West?: Towards a comparative sociocultural history of the Cold War 2. The Man Who Invented Truth: The tenure of Edward R. Murrow as director of the United States Information Agency during the Kennedy years 3. Soviet Cinema in the Early Cold War 4. Future Perfect?: Communist science fiction in the Cold War 5. The Education of Dissent: Radio free Europe and Hungarian society, 1951-56 6. The Debate over Nuclear Refuge 7. Some Writers Are More Equal Than Others: George Orwell, the state and Cold War propaganda

Patrick Major is Senior Lecturer in History at the University of Warwick and author of The Death of the KPD: communism and anti-communism in West Germany, 1945-1956 (Oxford University Press, 1997).

Rana Mitter is University Lecturer in the History and Politics of Modern China at Oxford University and author of The Manchurian Myth: Nationalism, Resistance, and Collaboration in Modern China (University of California Press, 2000).