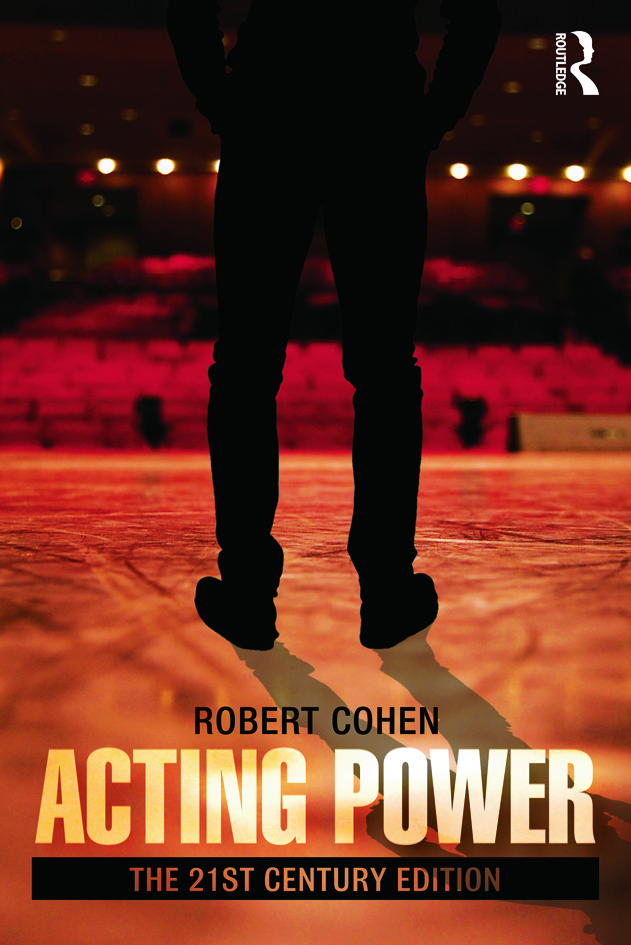 ‘Robert Cohen’s book, Acting Power, follows the tradition of his other book, Acting One, and has been the veritable bible for acting teachers for the last quarter century.’ – David Krasner, Emerson College

‘This book, above all else, is an attempt to explore the qualities of acting power…. to suggest to you, the actor, an approach toward not merely good acting but powerful acting. Great actors display the power to frighten – and the power to seduce – and can shift between the one and the other like a violinist can her notes.’

The first edition of Acting Power was a groundbreaking work of acting theory which applied sociological and psychological principles to actor training. The book went on to influence a generation of theatre and performance studies students and academics, and was translated into five languages.

This carefully revised 21st Century Edition (re)considers, in the context of today’s field:

Cohen’s elegant and rigorous updates emphasise the continuing relevance of his uniquely integrated and life-affirming approach to this field. The new edition draws on his extraordinarily rich career as teacher, scholar, director, translator and dramaturg. It is a recipe for thrilling theatre in any genre.

' [It is] easy to recognise why the first edition of Acting Power became a seminal text for practitioners in this field. The new edition is written in a lucid, observant and often amusing prose and provides practical exercises to allow the reader to grasp the logic of the theories and to experiment…Cohen's revised edition of Acting Power with its focus on process and craft retains its currency for the 21st century practitioner.' -Jayne Richards, Stanislavski Studies

'Informative, instructive, and prescriptive, the volume addresses creating and sustaining a powerful and authentic acting presence…Cohen's book is marked by his personalized style and his ability to illuminate elusive aspects of acting as both craft and art. Including quotes by professional directors and actors, this masterful book remains relevant and offers a distinctive voice for performance studies and a new generation of actors. Summing Up: Recommended.' - J. Artman, Chapman University, CHOICE

'Acting Power is…a refreshing read… I have certainly benefited from rereading him [Cohen], once again realising how detrimental being too attached to any one method, system or technique can be when appraising the art of acting.' - Rufus Swart, Stellenbosch University, South African Theatre Journal

Robert Cohen received his Doctor of Fine Arts from Yale School of Drama in 1965, and almost immediately became the founding Chair of the UCI Drama Department. Now in his 48th year on the faculty, he now holds the title of Claire Trevor Professor.

As well as teaching acting at UCI, Cohen has conducted workshops in over a dozen countries spanning four continents. In 1999 he was presented with the Career Achievement Award from the Association of Theatre in Higher Education.

He is also a director, translator, critic and playwright; and has directed more than a dozen professional productions at the Utah and Colorado Shakespeare Festivals.

After writing the ground-breaking book Acting Power in 1978, Cohen also authored the leading US acting textbooks Acting One/Acting Two and one of the leading world theatre history textbooks Theatre. Other books by Cohen include leading texts on acting, directing and theatrical collaboration, as well as a collection of published theatre essays and two drama anthologies.

Such is Cohen’s influence on the field; UCI presented him with their highest honour, the UCI Medal, and the campus now has a theatre named after him.