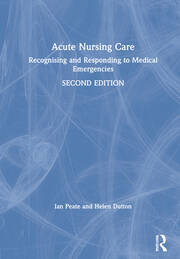 Delays in recognising deterioration, or inappropriate management of people in acute care settings can result in late treatment, avoidable admissions to intensive care units and, in some instances, unnecessary deaths. As the role of the nurse in healthcare settings continues to change and evolve, today's nursing and other healthcare students need to be equipped with the fundamental skills to recognise and manage deterioration in the patient in a competent and confident manner, appreciating the complexities of caring for those who are acutely unwell as you learn to become practitioners of the future.

Using a body systems approach, and fully updated in light of new NEWS2 and NMC future nurse standards, as well as acknowledging the challenges faced by people with delirium in acute care settings, the second edition of this book provides a comprehensive overview of the essential issues in this important subject. Topics covered include recognition and identification of physiological and mental deterioration in adults; identification of disordered physiology that may lead to a medical emergency linked to deterioration of normal function; relevant anatomy and physiology; pathophysiological changes and actions that need to be taken; immediate recognition and response; investigations, diagnosis and management issues; and teaching and preventative strategies.

Including case studies and test yourself questions, this book is an essential tool for student nurses who are required to undertake acute care experiences and are assessed in theory and practice.

Ian began his nursing career at Central Middlesex Hospital, becoming an Enrolled Nurse practicing in an intensive care unit. He later undertook three years student nurse training, becoming a Staff Nurse, then a Charge Nurse. He has worked in nurse education since 1989. His key areas of interest are nursing practice and theory. Ian has published widely. He was awarded an OBE in the Queen's 90th Birthday Honours List for his services to Nursing and Nurse Education and was bestowed a Fellowship from the Royal College of Nursing in 2017.

Helen completed her RGN at Addenbrooke's Hospital, Cambridge. After gaining experience in medical and surgical nursing she moved to St Thomas' Hospital, London to work in intensive care, then moved to become a Sister in Cardiothoracic Intensive Care at the Royal Brompton and Harefield NHS Trust. Her education career started at the Royal Brompton, then moved on to higher education. She is currently employed as a Senior Lecturer in Critical Care at the University of West London. Helen is course leader for BSc (Hons) Clinical Practice. Intensive and critical care nursing have been her main focus, leading the development of post qualifying critical care courses at the University of West London. She has published in her areas of interest; acute/enhanced/high dependency care, physical examinations skill for health care professionals and the early recognition and treatment of those who are at risk of deterioration.