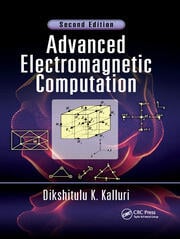 Advanced Electromagnetic Computation with MATLAB® discusses commercial electromagnetic software, widely used in the industry. Algorithms of Finite Differences, Moment method, Finite Element method and Finite Difference Time Domain method are illustrated. Hand-computed simple examples and MATLAB-coded examples are used to explain the concepts behind the algorithms. Case studies of practical examples from transmission lines, waveguides, and electrostatic problems are given so students are able to develop the code and solve the problems. Two new chapters including advanced methods based on perturbation techniques and three dimensional finite element examples from radiation scattering are included.

Since 1984, he had been with the University of Massachusetts Lowell, Lowell, advancing to the rank of full professor in 1987. He coordinated the doctoral program (1986-2010) and co-directed/directed the Center for Electromagnetic materials and Optical Systems (1993-2002/2003-2007). As a part of the center he established the Electromagnetics and Complex Media Research Laboratory. He had collaborated with research groups at the Lawrence Berkeley Laboratory, the University of California Los Angeles, the University of Southern California, New York Polytechnic University and the University of Tennessee, and has worked several summers as a faculty research associate at Air Force Laboratories. He retired in May 2010 but continued his association with the university guiding his doctoral students. He continues to teach his graduate courses on-line as Professor Emeritus. CRC Press published his two recent books: in April 2010 ‘Electromagnetics of Time Varying Complex Media Second Edition’ and in August 2011 ‘Electromagnetic Waves, Materials, and Computation with MATLAB’. He has published extensively on the topic of Electromagnetics and Plasmas. He supervised doctoral thesis research of 17 students.

Dr. Kalluri is a fellow of the Institut

"This book covers a broad area of electromagnetism in various dielectric media. It can be used as the textbook of intermediate level electromagnetic (EM) courses and special topic courses, as well as the reference book of researchers working in EM and plasma areas."
—Spencer Kuo, New York University, USA

"Electromagnetic Waves, Materials, and Computation with MATLAB is a monumental presentation of Electromagnetics, with a wonderfully pedagogical approach and an incredible wealth of topics."
— Christophe Caloz, Polytechnique Montréal, Québec, Canada