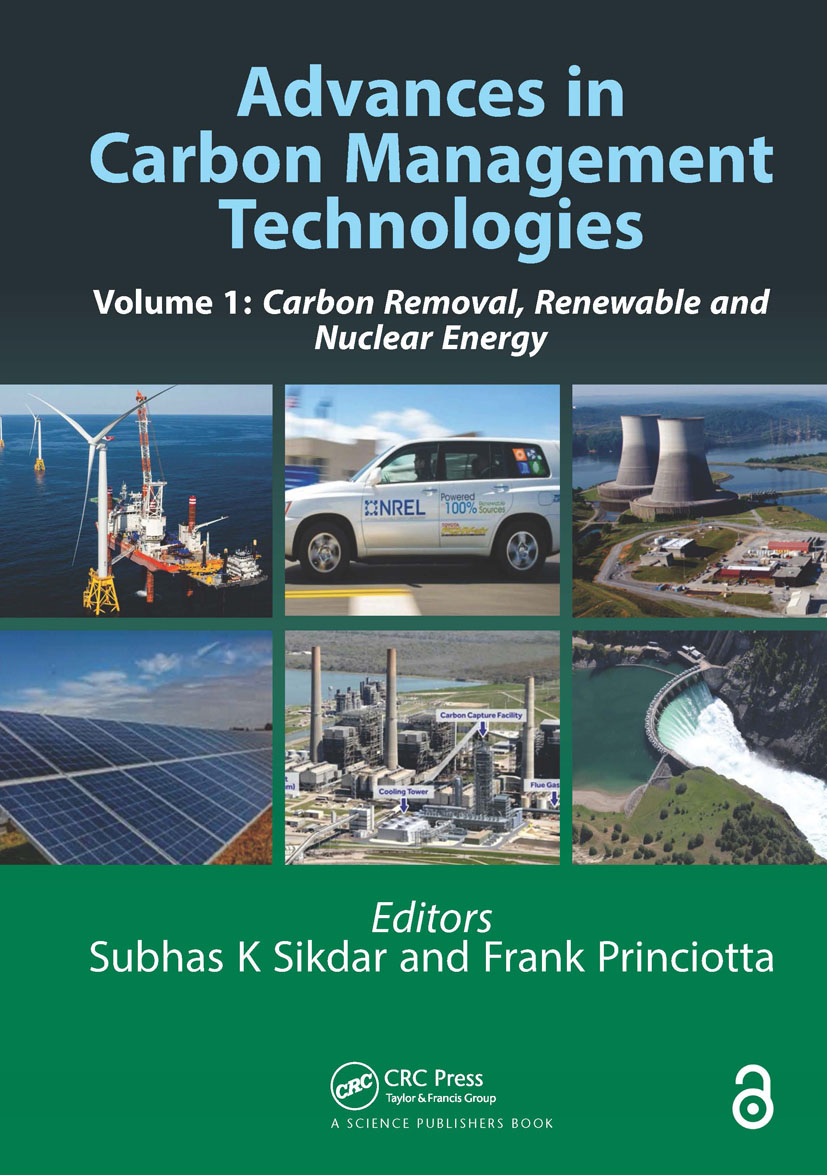 UN climate models predict global average temperature increases due to cumulative rise of atmospheric greenhouse gas emissions. This will have serious implications on life on Earth. Scientists have been engaged in research for reducing such emissions from current technologies as well as for developing low carbon and carbon neutral energy technologies. This book was motivated by the desire to compile recent advances in carbon management to examine promises and limitations of emissions measurements, energy efficiencies, carbon capture and sequestration, biomass waste utilization, electric power generation, energy storage, and carbon neutral power from nuclear, hydro, solar and wind.

Introductory. What key low-carbon technologies are needed to meet serious climate mitigation targets and what is their status.

Removing greenhouse gases from the air to stabilize the climate

Reducing carbon footprint of products (CFP) in the value chain

Carbon mitigation in the power sector: challenges and opportunities

The environmental impact of implementing CO2 capture process in power plants: effect of type of fuel and energy demand

Alternative pathways for CO2 utilization via dry reforming of methane

Coal to chemicals: a smart choice

Reducing the Carbon Footprint of Wind Energy: What Can Be Learned from Life-Cycle Studies?

Subhas K Sikdar retired as Associate Director for Science, National Risk Management Research Laboratory of USEPA. Earlier he held technical and managerial positions at Occidental Research Corp, National Institute of Standards and Technology, and General Electric Corporate Research & Development Center. Dr. Sikdar is an elected Fellow of AAAS, ACS, AIChE, IIChE, and winner of EPA bronze medals, R&D 100 awards, several national awards from AIChE, and distinguished achievement awards from EPA, University of Arizona, and University of Calcutta. He is Editor-in-Chief of Clean Technologies and Environmental Policy (Springer), and serves as a member of the conference committee of Engineering Conferences International. He has edited 16 books.

recently retired as Director of the Air Pollution Prevention and Control Division of the Office of Research & Development, Environmental Protection Agency.  He has a degree in Chemical Engineering from City University of NY (Tau Beta Pi, Omega Chi Epsilon) and a Nuclear Engineering Certificate from the Oak Ridge School of Reactor Technology. His division is responsible for RD & D on technologies for controlling and characterizing air pollution from major sources. He has been a key agency expert in air pollution control for over 40 years. He has been the recipient of an EPA gold medal, and three bronze medals for his accomplishments in the air pollution control field. He has also received the President’s Meritorious Executive Award on two separate occasions (Presidents Carter and H.W. Bush). He played the leadership role in the development and demonstration of sulfur dioxide pollution control technology for coal-fired boilers, which has been the mainstay of SO2 control worldwide. An author of many scientific papers on air pollution control, he has been a frequent speaker before technical societies and conferences and has testified before Congressional Committees.   In recent years he has focused on mitigating global climate change. He has analyzed the role that technology and cultural changes will need to play, if we are to avoid the potentially catastrophic impacts associated with unconstrained use of energy.