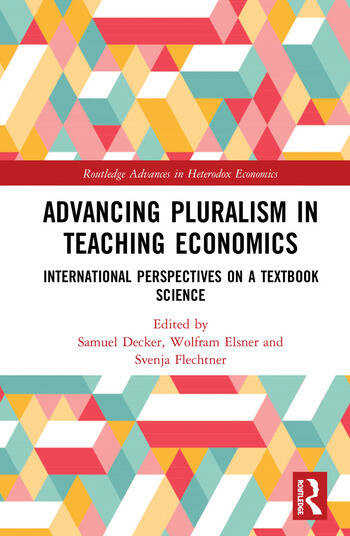 The complex economic problems of the 21st century require a pluralist, real-world oriented and innovative discipline of economics that is capable of addressing and teaching these issues to students. This volume is a state-of-the-art compilation of diverse, innovative and international perspectives on the rationales for and pathways towards pluralist economics teaching. It fosters constructive controversy aiming to incite authors and commentators to engage in fruitful debates.

This volume addresses a number of key questions: Why is it important for a social science to engage in pluralistic teaching? What issues does pluralist teaching face in different national contexts? Which traditions and practices in economic teaching make pluralist teaching difficult? What makes economics as a canonical textbook science particular and how could the rigid textbook system be innovated in a meaningful way? What can we learn from school education and other social science disciplines? Through examining these issues the editors have created a pluralist but cohesive book on teaching economics in the contemporary classroom drawing from ideas and examples from around the world.

offers a valuable insight into the methodology and application of pluralist economics teaching. It will be a great resource for those teaching economics at various levels, as well as researchers.

Economics and its teaching at a critical juncture: Introduction Samuel Decker, Wolfram Elsner and Svenja Flechtner

Part I: Why pluralism is important for (teaching) a serious social science: Foundations

2. Monism in modern science: The case of economics Frank Beckenbach

4. In and against orthodoxy: Teaching economics in the neoliberal era Ben Fine

5. An outsider's perspective: What can economics teaching learn from history didactics Astrid Schwabe

7. Economics education in India: From pluralism to neo-liberalism and to ‘Hindutva’ Sudipta Bhattacharyya

10. Teaching the euro crisis: What do students in Germany and France learn about the causes of Europe’s economic crisis? Philipp Kortendiek and Till van Treeck

11. “Waging the war of ideas”: Economics as a textbook science and its possible influence on human minds Silja Graupe

12. The schoolmaster’s voice: How professional identities are formed by textbook discourses in mainstream economics Jens Maesse

13. Why economics textbooks must, and how they can, be changed into a real-world and pluralist economics: The example of a fundamentally new complexity-economics micro-textbook Wolfram Elsner

14. What can we learn from school economics education? Janina Urban

Part IV: The prospects of pluralism in economics

16. Towards a critical and transdisciplinary economic science? Samuel Decker

Samuel Decker is an economist and activist based in Berlin, Germany. He works as scientific assistant for the online learning platform Exploring Economics (www.exploring-economics.org/en/). He holds a master’s degree in "Political Economy of European Integration" and is an active member of the student movement for pluralism in economics.

was Professor of Economics at the University of Bremen, Germany from 1995 until he retired in 2016. He has also worked as head of local economic development, head of the Planning Division of the Ministry of Economic Affairs of the State of Bremen, and as Director of the State of Bremen Government’s economic research institute, 1986 to 1995. He was president of the European Association for Evolutionary Political Economy, 2012–2016.

is an Assistant Professor of Pluralist Economics at the University of Siegen, Germany. She has been a research assistant at Europa-Universität Flensburg and Freie Universität Berlin. From 2014–2018, she was a council member of the European Association for Evolutionary Political Economy.