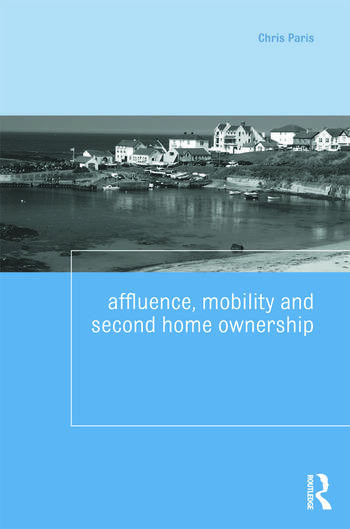 Despite the current recession, the frequency of second home ownership is still surprisingly high throughout the western world. While the UK and Ireland previously had lower occurrences of multiple dwellings compared to the rest of Europe, they are quickly catching up with a current surge in the ownership of second homes. The recent MP expenses scandal in the UK has also drawn attention to the prevalence of second homes (or more) within the middle classes, and the fact that the concept is becoming increasingly popular.

Chris Paris uses this text to address the reasons behind why second homes are becoming more popular, both within the usual domicile of the individuals, and in international locations. The socioeconomic factors and historical contexts of homes in cultures across the world are fundamental to explaining the choices in transnational home ownership, and Paris’ case studies and comparisons between additional homes in Europe, Australia, America and Asia expand upon the motivation for people to own a second home.

Affluence, Mobility and Second Home Ownership draws together debates on gentrification, globalisation, consumerism, environmental factors and investment to provide a balanced look at the pros, and cons, of second home ownership, and what implications it has for the future. An ideal text for students studying geography, urbanism and planning, this book is also of interest to individuals interested in the changing ways in which we make choices on our places of residence.

Chris Paris was Professor of Housing Studies at the University of Ulster until 2008. He has worked in universities and research institutes in the UK, Australia and Ireland, including the Australian National University and the Centre for Environmental Studies. He has wide international experience of scholarly and applied research and is author/co-author/editor of over 30 books, monographs and research reports on housing, planning and urban policy and over 100 journal publications.

‘This book fills an important gap in our understanding of second homes around the globe. Its focus on the second home market world wide and the links it draws between increasing affluence, mobility and the second homes industry reminds us that we now have a global housing market....Through this book Professor Paris shows both the strength and fragility of the holiday home phenomenon and in so doing provides a great service to all housing researchers and educators.’ - Andrew Beer, Professor of Geography in the School of the Environment, Flinders University, Adelaide, Australia

'A growing group of affluent and highly mobile executives are buying second homes, sometimes in countries other than their own, thereby reshaping housing markets and communities in new ways, both locally and globally. In this pioneering and thoughtful study of trends, impacts and policy choices in Europe and Australia, Chris Paris provides essential reading for Americans and Canadians who need to pay attention to similar – and still poorly researched – trends that affect North American housing markets.' – J. David Hulchanski, PhD, professor of housing studies, University of Toronto, and associate director for research, Cities Centre, Toronto

'Chris Paris brings both long experience and a new analysis to the question of the role of second homes - a subject which has been very little discussed since the 1970s and which is an increasingly important part of the working of the housing market as a whole.' - Christine Whitehead, Director of the Cambridge Centre for Housing and Planning Research, and Professor of Housing Economics, London School of Economics, UK

"The sociological perspective of this book provides a much-needed approach to examine the proliferation of second homes across national boundaries, such as that in southern Asia, and in the internal markets of the increasingly affluent Asian countries such as China. It will be useful for policy makers, planners and housing researchers pursuing better planning for housing and tourism development." - Rebecca L.H. Chiu, Centre of Urban Planning and Environmental Management, the University of Hong Kong

"I would recommend this book to anyone interested housing, planning, geography and travel and tourism. It is a good introductory text for students and has a wealth of facts and figures to dip into and some interesting case study examples. It highlights the complexity and fluidity of the second home ownership and balances the focus on affluence by engaging with common critiques of second homes. Chris Paris also considers the impacts of the recession of 2007 onwards." – Andrea Armstrong,Durham University, Housing Studies journal

Second home ownership has been widespread in most of the developed world for decades, but since the 1990s it has expanded significantly in a number of countriesincluding Britain and Ireland. This development has generated considerable public controversy, a variety of policy responses and a substantial academic literature. However, most of this literature derives from geography, sociology, planning, leisure and tourism and rural studies, and second homes have received little attention within the housing studies literature. This book is a useful and timely attempt to rectify this oversight....the author skilfully combines the literature on second homes with wider sociological literature on affluence, mobility and consumption to identify the drivers and implications of rising second home ownership...I think that this book is a valuable addition to the housing studies literature and would be a very useful purchase for those involved in researching or teaching courses on second homes. - Michelle Norris, School of Applied Social Science, Dublin, Ireland

“This book is well organized and well-written....It covers most of the important issues and it is worth owning. It is aimed at academics and some professionals in the housing industry. Most urban planners could benefit from reading it. This book may also be usable in more advanced housing courses.” – Australian Planner