Africa in World Affairs
Politics of Imperialism, the Cold War and Globalisation 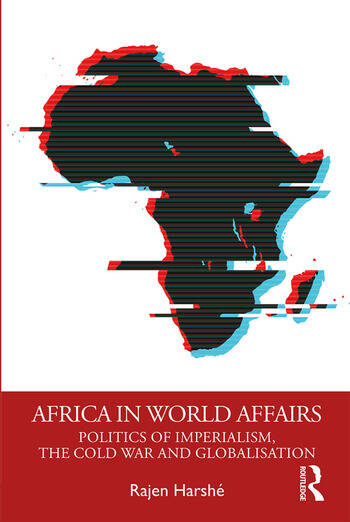 Africa in World Affairs: Politics of Imperialism, the Cold War and Globalisation

Africa finds itself at the centre stage of world politics in the twenty-first century. To truly determine its rising influence and role in world affairs would mean unravelling the politics of imperialism, the Cold War and globalisation.

Going beyond Euro-American perspectives, this book presents a comprehensive study of Africa and its role in world politics.

• Closely examines the transition of Africa in its colonial and post-colonial phases;

• Investigates the continent’s relationships with former colonial powers such as Britain, France and Portugal; untangles complexities of French neo-colonialism and sheds light on the role of the superpower, such as the USA and major and rising powers like China and India;

• Highlights complex and wide-ranging diversities of the region, and the ways in which it continues to negotiate with issues of modernity, racism and globalisation.

A core text on Africa and the world, this book will be indispensable for students of African studies, politics and international relations, and history. It will also be a must-read for policymakers, diplomats and government think tanks.

Introduction. 1. Colonial, Anti-colonial and Post-Colonial in Continuum 2. Emancipatory Winds of Pan-Africanism and African Unity Movements 3. South Africa: From Racism and Apartheid to African Renaissance 4. Exploring the Trail of French Neo-Colonial Dominance in Sub-Saharan Africa 5. Changing Complexities of the USA’s Imperial Policies in Africa 6. Unraveling complex shades in Sino-African Ensemble: Altruistic, Neo-Imperialist or Just a Partnership in the Development Process? 7. India’s Growing Presence in Africa: From a Developing Country to a Rising Power. Conclusion.

Rajen Harshé has taught Political Science and International Relations for more than four decades in places such as University of Hyderabad, Hyderabad, and South Asian University, New Delhi, India. He has written extensively on African and international affairs. He is a former Vice Chancellor of the Central University of Allahabad, India, and currently he is President at G.B. Pant Social Science Institute, Allahabad, India.

‘Rajen Harshe’s book rightly questions Western scholarship’s tendency to universalise its interpretations of the world, particularly of Africa – and goes on to craft a non-Western viewpoint for this enterprise. The author argues that contemporary Africa needs to be studied against the continuum of its colonial, anti-colonial, and post-colonial experience, which includes the impact of imperialism and the powerful forces of globalisation and market capitalism... This important study will serve those looking to better understand issues pertaining to the Africa of today. It is like a tour d’horizon: part political history and partly a history of ideas, and coming from a writer from the Global South, it compels attention.'