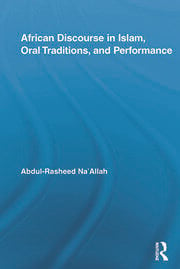 Through an engaged analysis of writers such as Wole Soyinka, Ola Rotimi, Niyi Osundare, and Tanure Ojaide and of African traditional oral poets like Omoekee Amao Ilorin and Mamman Shata Katsina, Abdul-Rasheed Na'Allah develops an African indigenous discourse paradigm for interpreting and understanding literary and cultural materials. Na'Allah argues for the need for cultural diversity in critical theorizing in the twenty-first century. He highlights the critical issues facing scholars and students involved in criticism and translation of marginalized texts. By returning the African knowledge system back to its roots and placing it side by side with Western paradigms, Na'Allah has produced a text that will be required reading for scholars and students of African culture and literature. It is an important contribution to scholarship in the domain of mobility of African oral tradition, and on African literary, cultural and performance discourse.

1. Èlàlòrò: A Yorùbá Indigenous Discourse on Criticism and Interpretation  2. Èlàlòrò and Translation  3. Some Thoughts on Traditional Hausa Aesthetics and Arabic Influence on Yorùbá and Hausa Written Traditions in Nigeria  4. Horses of Memory and The Word is an Egg: Osundare’s Poetic Voices  5. Cultural Poetics, African Diaspora, and the Global World: Tanure Ojaide’s I Want to Dance and Other Poems  6. African Cultural Revival as an Important Message in Death and the King’s Horseman and The Lion and the Jewel  7. Language and Culture in an African Adaptation of Sophocles' Oedipus Rex  8. Yorùbá Egungun: Some Critical Thoughts  9. Traditional Oral Genre in a Muslim Ilorin: Survival Challenges  10. Mamman Shata Katsina and Omoekee Amao Ilorin: Islam, Performance, and Orality

Abdul-Rasheed Na'Allah is Chair of the Department of African American Studies at Western Illinois University.

"This rich collection of essays contains some of the most original studies of the interaction between Islam and African cultures. In their specific focus on the centrality of the religion to the oral literature and indeed the entire range of expressive culture among the Yoruba people of Ilorin, the studies demonstrate the way in which Islam has functioned not as a constraining factor, as it has been widely presumed, but rather as a liberating force of the creative energies in Yoruba society."

"African Discourse in Islam, Oral Traditions, and Performance is the most important stylistic analysis of oral traditions published in the last twenty years. It is an original and groundbreaking study of the intertextual relations between tradition and modernity, Islam and the indigenous religions in Africa, oral poetry and popular music in Nigeria. Professor Abdul-Rasheed Na'Allah is exceptionally brilliant in his accounts of how Islam penetrated African oral traditions and music and filled them with Islamic verses and the names of Prophets from the Holy Quran... Na'Allah's analysis of the theories of translation, adaptation and change will also constitute an important contribution to comparative textual studies."

- Manthia Diawara, Distinguished Professor of Comparative Literature and Film, New York University, author of We Won't Budge: An Exile in the World (2003)

"...a good, solid work. The author's enthusiasm for the oral tradition is paramount but he shines in the other parts as well."