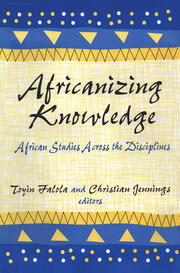 Nearly four decades ago, Terence Ranger questioned to what extent African history was actually African, and whether methods and concerns derived from Western historiography were really sufficient tools for researching and narrating African history. Despite a blossoming and branching out of Africanist scholarship in the last twenty years, that question is still haunting. The most prestigious locations for production of African studies are outside Africa itself, and scholars still seek a solution to this paradox. They agree that the ideal solution would be a flowering of institutions of higher learning within Africa which would draw not only Africanist scholars, but also financial resources to the continent.

While the focus of this volume is on historical knowledge, the effort to make African scholarship "more African" is fundamentally interdisciplinary. The essays in this volume employ several innovative methods in an effort to study Africa on its own terms. The book is divided into four parts. Part 1, "Africanizing African History," offers several diverse methods for bringing distinctly African modes of historical discourse to the foreground in academic historical research. Part 2, "African Creative Expression in Context," presents case studies of African art, literature, music, and poetry. It attempts to strip away the exotic or primitivist aura such topics often accumulate when presented in a foreign setting in order to illuminate the social, historical, and aesthetic contexts in which these works of art were originally produced. Part 3, "Writing about Colonialism," demonstrates that the study of imperialism in Africa remains a springboard for innovative work, which takes familiar ideas about Africa and considers them within new contexts. Part 4, "Scholars and Their Work," critically examines the process of African studies itself, including the roles of scholars in the production of knowledge about Africa.

This timely and thoughtful volume will be of interest to African studies scholars and students who are concerned about the ways in which Africanist scholarship might become "more African."