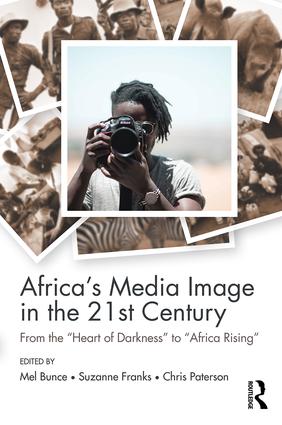 From the "Heart of Darkness" to "Africa Rising", 1st Edition

Africa’s Media Image in the 21st Century is the first book in over twenty years to examine the international media’s coverage of sub-Saharan Africa. It brings together leading researchers and prominent journalists to explore representation of the continent, and the production of that image, especially by international news media. The book highlights factors that have transformed the global media system, changing whose perspectives are told and the forms of media that empower new voices.

Case studies consider questions such as: how has new media changed whose views are represented? Does Chinese or diaspora media offer alternative perspectives for viewing the continent? How do foreign correspondents interact with their audiences in a social media age? What is the contemporary role of charity groups and PR firms in shaping news content? They also examine how recent high profile events and issues been covered by the international media, from the Ebola crisis, and Boko Haram to debates surrounding the "Africa Rising" narrative and neo-imperialism.

The book makes a substantial contribution by moving the academic discussion beyond the traditional critiques of journalistic stereotyping, Afro-pessimism, and ‘darkest Africa’ news coverage. It explores the news outlets, international power dynamics, and technologies that shape and reshape the contemporary image of Africa and Africans in journalism and global culture.

"Mel Bunce, Suzanne Franks and Chris Paterson have assembled the single most important collection of analyses of African media and image in at least a quarter of a century. In practically all respects this volume goes beyond previous, mainly 20th century, northern-centered ways of framing and thinking about Africa's media image and, in their place, carries us well into the 21st century. This is a post-'Africa pessimism' century of African and international narratives of Africa. These are told through an astonishing variety of perspectives, technologies and media platforms. Their audience includes a robust, continent-wide and technology-empowered middle-class. Processes of imperialism and neo-imperialism have not disappeared. But the agents, trajectories and meanings of imperialism are opened to re-assessment."

"This is an excellent book which fills a crucial gap in existing literature. It has a wide range of contributors offering key insights and analysis - a must read for students and academics in development studies as well as those in media and international journalism."

1. The international news coverage of Africa: beyond the "single story"

2. Media perspectives: in defence of Western journalists in Africa

3. Reporting and writing Africa in a world of unequal encounters

4. Media perspectives: how does Africa get reported? A letter of concern to 60 Minutes

5. How not to write about writing about Africa

7. The image of Africa from the perspectives of the African diasporic press in the UK.

8. Mediating the distant Other for the distant audience: how do Western correspondents in East and Southern Africa perceive their audience?

10. Foreign correspondents in sub-Saharan Africa: their socio-demographics and professional culture

11. Media perspectives: reflecting on my father’s legacy in reporting Africa

13. Instagram as a potential platform for alternative Visual Culture in South Africa

17. AIDS in Africa and the British media: shifting images of a pandemic

18. Media perspectives: a means to an end? Creating a market for humanitarian news from Africa

19. It was a "simple", "positive" story of African self-help (manufactured for a Kenyan NGO by advertising multinationals)

PART IV: Politics in the representation of Africa

22. Africa through Chinese eyes: new frames or the same old lens? African news in English from China Central Television, compared with the BBC

28. Nollywood news: African screen media at the intersections of the global and the local

Mel Bunce is a Senior Lecturer in Journalism at City University London, where she researches and teaches in the areas of global media, news production, and ethics. A former journalist from New Zealand, Mel has researched the work of foreign correspondents in Sudan, Uganda, Kenya, Senegal, and Nigeria.

is Professor of Journalism at City University London, where she is Head of Department and convenes a module on Humanitarian Communication. A former BBC TV current affairs journalist, she has made several films about Africa. Her publications include Reporting Disasters: Famine, Aid, Politics and the Media (2013).

researches and teaches at the University of Leeds, UK. He wrote in the original Africa’s Media Image (1992), has co-edited five books, and has authored The International Television News Agencies (2011) and War Reporters under Threat: The United States and Media Freedom (2014).