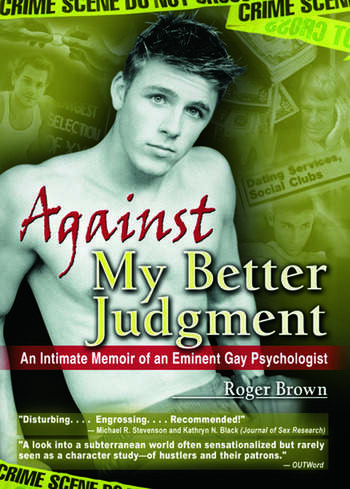 Against My Better Judgment: An Intimate Memoir of an Eminent Gay Psychologist

Against My Better Judgment: An Intimate Memoir of an Eminent Gay Psychologist is an extraordinary and moving account of the life of a gay man in his late 60s after he loses his companion of 40 years to cancer. A leading professor of psychology at Harvard University, Roger Brown bravely comes forth with his compelling story of grief, loneliness, and a relentless search for intimacy, healing, and self-acceptance. Readers gain insight into a stage of life experienced by gay men of which little is written or spoken due to the ageism that characterizes homosexual culture. Against My Better Judgment reveals deeply personal truths that will prepare gay men for what to expect in the later stages of life. Universal in nature, these truths will speak to readers from various lifestyles and of all ages. Readers will recognize the book as a story of looking for love in all the wrong places, but will also see in it a process of discovery--both internal and external. In the aftermath of his lover’s death, Brown turns to prostitutes for companionship, for relieving repressed sexual energy, and even for love. Through his unique relationships with three young men, he does not find the romantic love he so desperately seeks, but discovers that his idea of human nature has been formed by his particular life position and association with people who share his values, knowledge, and privileges. Once he goes outside his social and intellectual circle, he acquires a new perspective on life and realizes how far from universal truth his notions of humanity have been.Readers of Against My Better Judgment will gain a different perspective on the complexities of love, relationships, fidelity, human nature, and the hardships of life inevitably faced by all humans--straight, gay, or bisexual. Gay men, lesbians, psychologists, widowers, therapists, and anthropologists, as well as sensitive readers of any background, will heighten their understanding of what it means to be human. This remarkable story makes a tremendous contribution to existing gay literature and the timeless struggle of art and literature to make sense of the universe and the place of humans within it. Echoing life, Against My Better Judgment, with its brutal honesty, intrigues and repels alternately, just as it elicits both sadness and laughter.