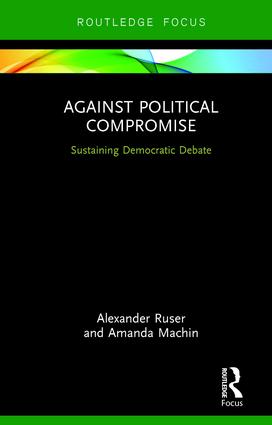 Political compromise is emerging as a preferred solution for numerous apparently intractable problems. Many have pointed to the rising degree of political polarisation around issues such as climate change, immigration and abortion. These are ‘wicked problems’ that are clearly not conducive to any sort of political consensus. The groups and individuals who are party to these issues disagree, often both fully and fiercely. As an alternative, political compromise seemingly offers a way of respecting difference while simultaneously generating a decision upon which policy can move forward. But proponents of political compromise should also acknowledge its significant weaknesses and dangers. Invoking recent examples from various policy areas to illustrate their claims, the authors assert that compromise can disguise inequality, reduce plurality and heighten uncertainty. In short, compromise can weaken democracy and must not be seen as some sort of political panacea.

This concise, accessible text offers a strong and provocative argument that provides a crucial counterpoint to the promise of compromise. It should prove of interest to students and scholars interested in compromise and consensus as well as democratic governance, social inequality, political apathy and environmental politics.

'At a time when the appeal of uncompromising populists is everywhere on the rise, the art of political compromise might seem indeed lost. Ruser and Machin issue a timely reminder of the towering importance of questioning and unveiling the conditions and constraints, the virtues and vices, of political compromise.' Nico Stehr FRSC, Karl-Mannheim Chair of Cultural Studies, Zeppelin University

'Through an engaging interrogation of theory and practice, the authors remind us of the need to think more critically about the motivations, process and outcomes of political compromise. An intriguing and provocative contribution to contemporary democratic theory.' Graham Smith, Professor of Politics, Centre for the Study of Democracy, University of Westminster

'Consensus, rational compromise, and deliberative democracy are the latest versions of the idea that reason can replace force in political life. Ruser and Machin make a timely and important contribution to democratic theory and the sociology of politics by explaining how social issues of trust, social capital and exclusion are inseparable from the process of deliberation, and show it does not allow us to escape from conflict, ineradicable difference, and uncertainty – in a word, politics.' Stephen Turner, Distinguished University Professor, University of South Florida

Chapter One: The Problem of Inequality

Chapter Two: The Problem of Plurality

Chapter Three: The Problem of Uncertainty

Alexander Ruser is currently a senior researcher. He holds a PhD in Sociology from the Max-Weber-Institute of Sociology at Heidelberg University and was a Dahrendorf Fellow at the Hertie School of Governance, Berlin, and the London School of Economics and Political Science. He is currently researching the impact of ‘expert knowledge’ in public deliberation and political decision-making in the current Euro-Crisis. Alexander is an active member of an international research network on social philosophy of science coordinated by the Russian Academy of Science.

Amanda Machin is a postdoctoral researcher at Zeppelin University, Germany. She holds a PhD in Political Theory from the University of Westminster, London, and previously held a research fellowship at the Institute of Advanced Sustainability Studies, Potsdam. She is currently researching the interrelationship of climate change, citizenship, democracy and identity. Her books are Nations and Democracy: New Theoretical Perspectives (Routledge, 2015) and Negotiating Climate Change: Radical Democracy and the Illusion of Consensus.