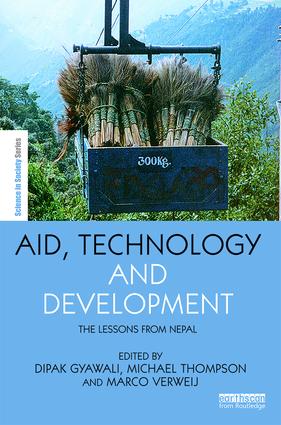 The Lessons from Nepal, 1st Edition

Over the last 50 years, Nepal has been considered an experiential model in determining the effectiveness and success of global human development strategies, both in theory and in practice. As such, it provides a rich array of in-depth case studies in both development success and failure. This edited collection examines these in order to propose a novel perspective on how human development occurs and how it can be aided and sustained.

Aid, Technology and Development: The lessons from Nepal

champions plural rationality from both a theoretical and practical perspective in order tochallenge and critique the status quo in human development understanding, while simultaneously presenting a concrete framework with which to aid citizen and governmental organisations in the galvanization of human development.

Part 1: The Dharma of Development: A Conceptual Framework

Chapter 5 Bhattedanda Milkway: Why a Climate- and Mountain-Friendly Technology Continues to Be Ignored  (Madhukar Upadhya)

Part 3: Beyond the Age of Aid

Chapter 12 Nepal's Experience of Foreign Aid, and How It Can Kick the Habit (Prakash Chandra Lohani)Chapter 13 Afterword: The Lessons from Nepal (Dipak Gyawali, Michael Thompson and Marco Verweij)

Dipak Gyawali is a hydroelectric power engineer trained at Moscow Energy Institute and a political economist trained at the Energy and Resources Group of the University of California at Berkeley and was Nepal’s Minister of Water Resources in 2002/2003. A Pragya (Academician) of the Nepal Academy of Science and Technology, he conducts interdisciplinary research at the interface of technology and society, mostly from the perspectives of Cultural Theory. He has been a visiting professor/research scholar as well as member of advisory boards throughout various universities and international organizations, including UN University in Yokohama, Battelle Pacific Northwest National Lab and Mekong’s MPower. Currently he is on the advisory committee of UNESCO’s World Water Assessment Program, Stockholm International Water Institute’s Scientific Program Committee, and IDS Sussex STEPs Center’ advisory board. He chairs Nepal Water Conservation Foundation as well as Inter Disciplinary Analysts.

Michael Thompson has had a long association with Nepal: first as a teenage soldier in the Malayan "emergency" (where he served in the British army's Gurkha Division), then as a Himalayan mountaineer, and subsequently as an anthropologist-cum-policy analyst. Trained at University College London (B.Sc, Ph.D) and Oxford (B.Litt), he is currently a senior researcher at the International Institute for Applied Systems Analysis, a global change think-tank in Austria. There he develops and applies the concept of "plural rationality": people doing very different things and yet still behaving rationally, given their different sets of convictions as to how the world is and people are.

Marco Verweij is Professor of Political Science at Jacobs University in Bremen, Germany. He holds a doctorate in social and political science from the European University Institute in Florence, Italy, and previously earned his keep at the Max Planck Institute for Research on Collective Goods in Bonn, Germany, and at the Singapore Management University. In his research, he attempts to understand how ‘wicked’ social and environmental problems can be resolved through the combined forces of (inter)governmental action, entrepreneurship, technological innovation, as well as civil society engagement. He also explores the possible synergies between social and political theory, brain research and the analysis of human complex systems.

The Earthscan Science in Society Series

The Earthscan Science in Society Series aims to publish new high quality research, teaching, practical and policy- related books on topics that address the complex and vitally important interface between science and society.