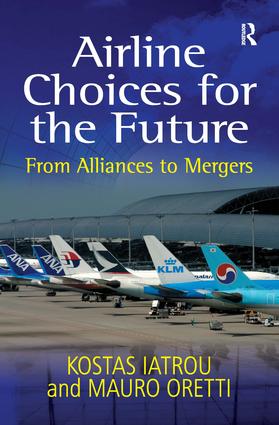 Airline Choices for the Future

From Alliances to Mergers, 1st Edition

Airline Choices for the Future: From Alliances to Mergers offers an up-to-date assessment of the industry as it stands today, delivering a comprehensive insight into how the world of airline alliances is changing, and how the merger phenomenon is likely to fit into the new scenario. The purpose of this book is twofold. Firstly, it outlines the evolution and the reasons behind alliances between international air carriers, the alliances' track records and the way they have affected airlines and the air transport industry. Secondly, drawing on past and more recent developments in the industry, it examines the experiences airlines involved in cross-border mergers have gone through and the advantages and difficulties they have come across. Alliances and mergers are presented from both the airline and the consumer perspective. The book provides a balanced account of where mergers and alliances have taken the industry to date, bridging the gap between merger theory and implemented practices and strategies. It also identifies the challenges alliances and cross-border mergers have faced and highlights the key forces affecting airline development. Theoretical evidence is supplemented by data collected via surveys and interviews with airline executives, aviation experts, consultants and regulatory bodies.

’Alliances have become an important part of the network airline scene. This book is essential reading for those who wish to understand alliances and their impact on the international airline industry, providing well-researched discussion on key questions such as how far they really benefit airlines, do they matter to passengers, and will mergers replace them in the future?’ Peter Morrell, Cranfield University, UK 'As an Alliance manager, I was pleased to read this valuable book that covers most of the airline alliances areas. It has gone further than a simple description of the recent phenomenon to include chapters on the history of global alliances and research on their impact, such as how customers benefit from them, antitrust concerns, relationship with mergers, etc. Easy to read, it is captivating and may be considered as the happy ending to the Hard Landing book published 10 years ago in the US by Thomas Petzinger Jr. It will be a natural reference for all executives wishing to join the alliance game.’ Patrick Bianquis, VP Alliances, Air France 'Dr. Iatrou and Oretti have skillfully addressed one of the most important contemporary issues of aviation management and policy - alliances. They explain the genesis and evolution of airline alliances, the economic and marketing rationales for their creation, and the public policy concerns they raise. The authors then address the complex issues of cross-border airline mergers, the difficulties they encounter, a product of State sovereignty over airspace, State concerns over security, and labor concerns over wages and employment. This book offers an insightful assessment of the airline alliance and merger landscape unfolding in the 21st century.' Paul Stephen Dempsey, McGill University, Canada 'The authors are very successful in combining academic research with practical data on alliances and merger management. They make good use of statistics, charts, and figures on revenue passenger kilometers, passangers f

Contents: Foreword; Preface; Once rivals, now partners: why?; Learning from the past, looking at the present: first the facts; Once rivals, now partners: how?; Landed or stranded - are alliance customers happy?; Allied and profitable, or miserably entangled?; Learning from the past, looking to the future: success stories; Not always a happy ending; 'The road not taken': further along the alliance or the merger path?; References; Index.

Dr Kostas Iatrou works as an air transport consultant and is partner of AirConsulting Group. He holds a PhD in Air Transport Management from Cranfield University, UK. In his thesis he examined the impact of airline alliances on the partners' traffic. He has conducted seminars on alliances under the auspices of IATF of IATA. Kostas has presented his work and research on alliances, including the impact of alliances on airlines and alliance branding, at the ICAO Liberalisation Symposium and at several Air Transport Research Society (ATRS) World Conferences. His research findings have been referred to in Airline Business. His articles have featured in numerous air transport publications such as the Journal of Air Transport Management, the Journal of Air Transportation, the Annals of Air and Space Law of McGill University and Aerlines. Finally, he is the editor of the AirTransportNews.aero Mauro Oretti is Director of Alliance Development at Alitalia, which he joined in 1990 after a few years spent working in the automobile industry in Turin, Italy, his home town. During his early days with the airline he covered a number of positions in the Sales & Marketing area, working mostly abroad. In 1997 he was asked to create a new department fully dedicated to alliances. He witnessed the rise and fall of the KLM-Alitalia quasi-merger, then helped forge the carrier's new partnership strategy and its entrance into the global SkyTeam alliance, the activities of which he now coordinates within Alitalia. He lives in Rome with his wife and two children.