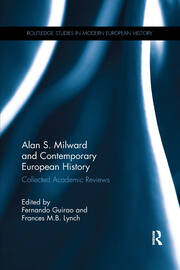 Alan S. Milward was a renowned historian of contemporary Europe. In addition to his books, as well as articles and chapters in edited books, he also wrote nearly 250 book reviews and review articles, some in French and German, which were published in journals world-wide. Taken together they reveal a remarkable degree of theoretical consistency in his approach to understanding the history of Europe since the French Revolution.

This book brings together these previously unexamined pieces of historical analysis in order to trace and shed light on key intellectual debates taking place in the second half of the 20th century. Many of these discussions continue to influence us today, such as the role of Germany in Europe, the economic, social and political foundations of European integration, the European rescue of the nation-state, the reasons for launching the single currency, the conditions for retaining the allegiance of European citizens to the notions of nation and supra-nation, and ultimately the issue of democratic governance in a global environment. In bringing together these reviews and review articles, the book provides an introduction to the main scholarly achievements of Milward, in his own words.

Fernando Guirao and Frances M.B. Lynch provide an introduction to the volume, which both guides the reader through many of the academic debates embedded within the text while underlining their contemporary relevance. By introducing and bringing together this hitherto overlooked treasure trove of historical analysis, this book maps a close itinerary of some of the most salient intellectual debates of the second half of the 20th century and beyond. This unique volume will be of great interest to scholars of economic history, European history and historiography.

is a Reader in History at the University of Westminster, London, U.K.

‘Sadly missing from the ongoing discussion how to solve the problems of both the Eurozone and the European Union is the voice of Alan S. Milward (1935-2010). This collection of his reviews of the literature generated by both European projects reveals his ideas, often contrarian, about the ultimate sources of legitimization for both projects and expresses them pointedly and pithily as only Alan could.’ — Larry Neal, Emeritus Professor of Economics, University of Illinois at Urbana-Champaign, USA

‘A most revealing and insightful exploration of an outstanding historian's intellectual trajectory, this collection of Alan S. Milward’s reviews offers vivid reflections on many methodological and theoretical issues the historical profession has grappled with over the last 40 years.’ — Federico Romero, Professor of History, European University Institute, Italy

'This collection of book reviews by eminent historian of twentieth-century Europe Alan S. Milward amounts to much more than the sum of its parts. By publishing an exhaustive collection, the editors offer readers the opportunity not only to trace Milwards's own intellectual trajectory, but, more broadly, interrogate the development of historiographic and public debates on a wide range of themes, including economy and politics in World War Two, the postwar settlement, European integration, and national sovereignty. The collection highlights Milward's intellectual generosity and critical engagement with major debates of contemporary history, and presents new questions (although no easy answers) to today's European crisis.' — Dr Maud Anne Bracke, Senior Lecturer in Modern European History University of Glasgow, UK

'In addition to the reviews themselves, this volume benefits from a stimulating essay by the editors which provides a brief overview of Milward’s work and, more provocatively, offers a Milwardian analysis of the ongoing Eurozone crisis [...] This book will be enlight