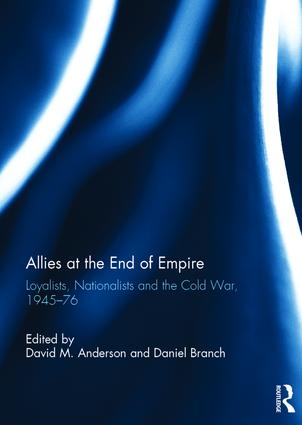 Allies at the End of Empire

The wars of decolonization fought by European colonial powers after 1945 had their origins in the fraught history of imperial domination, but were framed and shaped by the emerging politics of the Cold War. In all the counter-insurgencies mounted against armed nationalist risings in this period, the European colonial powers employed locally recruited militias – styled as ‘loyalists’ – to fight their ‘dirty wars’.

These loyalist histories have been neglected in the nationalist narratives that have dominated the post-decolonization landscape, and this book offers the first comparative assessment of the role played by these allies at the end of empire. Their experience illuminates the deeper ambiguities of the decolonization story: some loyalists were subjected to vengeful violence at liberation; others actually claimed the victory for themselves and seized control of the emergent state; while others still maintained a role as fighting units into the Cold War. The overlap between the history of decolonization and the emergence of the Cold War is a central theme in the studies presented here. The collection discusses the categorization of these ‘irregular auxiliary’ forces after 1945, and presents seven case studies from five European colonialisms, covering nine former colonies – Portugal (Angola), the Netherlands (Indonesia), France (Algeria), Belgium (Congo) and Britain (Cyprus, Kenya, Aden, South Yemen and Oman). This book was originally published as a special issue of the International History Review.

Introduction: Allies at the End of Empire—Loyalists, Nationalists and the Cold War, 1945–76 David M. Anderson and Daniel Branch

2. ‘Gathered on the Point of a Bayonet’: the Negara Pasundan and the Colonial Defence of Indonesia, 1946–50 Roel Frakking

4. Toads and Informers: How the British Treated their Collaborators during the Cyprus Emergency, 1955–9 David French

5. Reprisal Violence and the Harkis in French Algeria, 1962 Martin Evans

6. The suppression of the Congo rebellions and the rise of Mobutu, 1963–5 Ludo De Witte

7. Saved by the Civil War: African ‘Loyalists’ in the Portuguese Armed Forces and Angola’s Transition to Independence Pedro Aires Oliveira

8. Out of Arabia: British Strategy and the Fate of Local Forces in Aden, South Yemen, and Oman, 1967–76 Rob Johnson

David M. Anderson is Professor of African History in the Global History and Culture Centre at the University of Warwick, UK. He has published widely on the history and politics of eastern Africa, including The Khat Controversy (2007), and Histories of the Hanged (2005). He is the editor of The Routledge Handbook of African Politics (2013). He is currently engaged in wider research on the history of empire and violence.

is Professor of Modern African History at the University of Warwick, UK. He is theauthor of Defeating Mau Mau, Creating Kenya (2009), and Kenya: Between Hope and Despair 1963-2012 (2011). He is now researching a book about the life of Tom Mboya, Kenya’s most charismatic political leader of the 1960s.