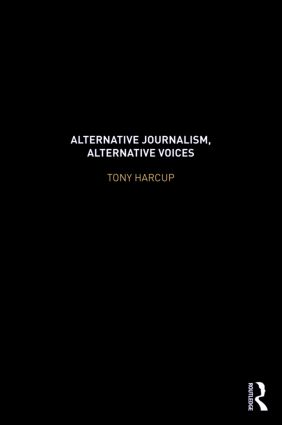 Bringing together new and classic work by Tony Harcup, this book considers the development of alternative journalism from the 1970s up until today.

Bringing theory and practice together, Harcup builds an understanding of alternative media through the use of detailed case studies and surveys. Including opinions of journalists who have worked in both mainstream and alternative media, he considers the motivations, practices and roles of alternative journalism as well as delving into ethical considerations.

'This book is a must read for any budding (or professional) journalist and any journalism or media scholar who wants to make a difference to the current media landscape.' - Andrea Baker, Media International Australia

'Inevitably there is mixture of the personal and political, the subjective and objective in this review, but in a sense that is what much of the best writing in the alternative press was about, and this book is a valuable contribution to the exploration of its place in the history of journalism.' - Granville Williams, Journalism Education

'…travelling from the early chapters full of relaxed memoir and the poetry of schoolchildren and factory workers - direct and powerful - to, later on, the academic theses of people such as Clemencia Rodriquez, who never use one syllable where six will do, make this a slightly peculiar read. But one with treasures all the same.' - Bibi van der Zee, British Journalism Review

'This book [will] help scholars and students think beyond the mainstream and reflect on how other media contribute to the ethical landscape of journalism.' - Syed Irfan Ashraf, Journal of Mass Media Ethics

'Coming from an author with long-standing experience in the alternative media sector, the book gives voice to experiences of alternative media activists themselves, including the experiences of the author. This approach should make the book particularly attractive not only to journalism scholars and practitioners but also to educators and students. Another key strength of the book is its emphasis on parallels between historical cases of alternative journalism and current examples, highlighting a strong ‘continuum of practice’ between the two.' - European Journal of Communication

Tony Harcup is Senior Lecturer at the Department of Journalism Studies, University of Sheffield. His previous publications include: Journalism: Principles and Practice (2nd ed, 2009); The Ethical Journalist (2007); Newspaper Journalism (2010, co-authored with Peter Cole) and A Northern Star: Leeds Other Paper and the alternative press 1974-1994 (1994).