Alternative Theories of Competition
Challenges to the Orthodoxy 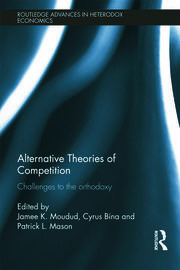 Alternative Theories of Competition: Challenges to the Orthodoxy

The history of policymaking has been dominated by two rival assumptions about markets. Those who have advocated Keynesian-type policies have generally based their arguments on the claim that markets are imperfectly competitive. On the other hand laissez faire advocates have argued the opposite by claiming that in fact free market policies will eliminate "market imperfections" and reinvigorate perfect competition.

By drawing on the insights of the classical political economists, Schumpeter, Hayek, the Oxford Economists' Research Group (OERG) and others, the authors in this book challenge this perfect versus imperfect competition dichotomy in both theoretical and empirical terms. There are important differences between the theoretical perspectives of several authors in the broad alternative theoretical tradition defined by this book; nevertheless, a unifying theme throughout this volume is that competition is conceptualized as a dynamic disequilibrium process rather than the static equilibrium state of conventional theory. For many of the authors the growth of the firm is consistent with a heightened degree of competitiveness, as the classical economists and Schumpeter emphasized, and not a lowered one as in the conventional 'monopoly capital' and imperfect competition perspectives.

Foreword by John Weeks  Introduction: The Search for an Alternative  1. "The Fallacy of Competition: Markets and the Movement of Capital"  2. "The Hidden History of Competition and its Implications"  3. "Synthetic Competition, Global Oil, and the Cult of Monopoly"  4. "Catallactic Competition, Business Organization, and Market Order"  5. "Schumpeterian Competition"  6. "The Theory of Innovative Enterprise: Methodology, Ideology, and Institutions"  7. "Competition, Going Enterprise, and Economic Activity"  8. "Sraffa, the General Rate of Profit, and the Theory of the Firm: A Conjectural Approach"  9. "Explaining Long Term Exchange Rate Behavior in the United States and Japan"  10. "Components of Differential Profitability in a Classical/Marxian Theory of Competition: A Case Study of Turkish Manufacturing"  11. "Classical Competition and Regulating Capital: Theory and Empirical Evidence"  12. "Are Mega-Corps Competitive? Some Empirical Tests of Business Competition"