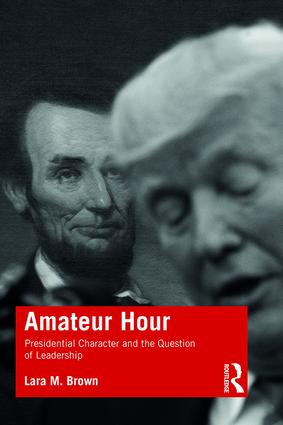 Presidential Character and the Question of Leadership, 1st Edition

In order to understand how Donald Trump's character was thought to be a good fit for the presidency by many Americans, this book reaches back into history to examine the individual characters of the contemporary presidents. Institutional reforms, political events, and cultural changes have altered societal expectations about the appropriate character of a president and what constitutes presidential leadership.

Applying a framework of courage, curiosity, and compassion, Lara M. Brown brings character analysis together with leadership approaches in examining the crucial third year of any presidency to gauge its success or failure. Through this comparative investigation, she demonstrates that the character of a president's leadership does not change in office. Thus, the likely success of future presidential candidates can be evaluated long before they step into the White House.

Ultimately, Brown shows why American voters are likely to continue to elect unsuitable "amateur outsiders" unless and until systemic reforms are adopted or a cultural reassessment of character occurs. Intended for students and scholars of the presidency, this book holds great appeal for general readers who quest for understanding of the 2016 presidential election and are looking toward 2020 (and beyond) with trepidation as well as hope.

In Amateur Hour: Presidential Character and the Question of Leadership, Lara Brown provides fascinating insights into and profiles of the character of our nation’s presidents from George Washington to Donald Trump. It is a compelling reflection on the events that shaped their characters and how they handled some of the most significant challenges of their era.

Of course, our leaders weren’t always people of character. But at least they made a pretense of trying to look like they had character. They didn’t intentionally revel in their bad behavior. Too often today, ‘character’ is replaced by mere force of personality. That’s like replacing beautiful music with just loud noise. This book is a great addition to presidential history."

"Brown adopts a 'leadership' approach to the presidency that stresses character, competence, flexibility, and experience. She finds most recent presidents who rise to power attacking corruption in the system--outsiders and amateurs--as both undermining public trust and failing to perform effectively in office. This work is sweeping in scope, bold in presentation, original in approach, and compelling in argument. It is a masterwork that will become an instant classic."

"Lara Brown has created a new paradigm for predicting presidential leadership, based less on skill sets brought to the office than on the character of the office holder. Using the four themes of optimism, courage, curiosity and character, Brown’s ground-breaking work in Amateur Hour: Presidential Character and the Question of Leadership examines nine presidents, including Donald Trump, to identify how character shaped the decisions they made in office. This is a book that every presidential scholar should include in the classroom and every citizen should read before casting a vote. "

"Lara Brown’s masterful examination of the presidency and the presidents who inhabit the office is a must read for anyone with any interest in the office itself or the office holders. Brown has done a complex and important multi-method study of the office, starting from the original conception of the presidency at the constitutional convention and Washington’s role as the first occupant of the office. The centerpiece of Amateur Hour: Presidential Character and the Question of Leadership is the focus on our understanding—from the time of Washington, through Lincoln, to the contemporary period—of the role that character should play, but often has not, of late, in terms of persons elected to the White House and how they conduct themselves in the office and as a leader. Brown’s analysis interrogates the scholarship around the concept of presidential psychology and leadership, and unpacks the connections between leadership in this complicated elected office and how we have, more recently, elected presidents who are often lacking in experience, and why this is problematic. This is a fascinating book, integrating historical analysis of American political development alongside contemporary analytical tools developed to assess leadership qualities. Brown brings her deep knowledge of the presidency to the evaluation of our contemporary presidents, those elected post-Watergate, and compels the reader to consider the interaction of character, leadership, and the demands of the office on each of the individuals who has been elected to the presidency since 1976. And this book is a joy to read—the writing is clear and engaging, taking the reader through multiple analytical frameworks with a propulsive narrative and discussion."

"This book examines a critical and under-examined topic in presidency studies. It presents a carefully structured approach to evaluating presidential character, incorporating political environment and institutional context as well as individual leadership qualities. With detailed historical and recent case studies, this engaging analysis will be highly instructive for scholarly research as well as the classroom."

7. The Problematic Presidency of a National Celebrity: Donald J. Trump

8. Performing the Presidency: Continuity and Change