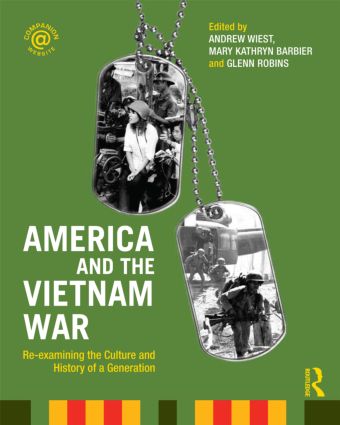 America and the Vietnam War

Re-examining the Culture and History of a Generation, 1st Edition

The Vietnam War was one of the most heavily documented conflicts of the twentieth century. Although the events themselves recede further into history every year, the political and cultural changes the war brought about continue to resonate, even as a new generation of Americans grapples with its own divisive conflict.

America and the Vietnam War: Re-examining the Culture and History of a Generation reconsiders the social and cultural aspects of the conflict that helped to fundamentally change the nation. With chapters written by subject area specialists, America and the Vietnam War takes on subjects such as women’s role in the war, the music and the films of the time, the Vietnamese perspective, race and the war, and veterans and post-traumatic stress disorder. Features include:

Heavily illustrated and welcoming to students and scholars of this infamous and pivotal time, America and the Vietnam War is a perfect companion to any course on the Vietnam War Era.

2. Historians and the Origins of the Vietnam War, Matthew Masur

3. The "Other" Vietnam War, Andrew Wiest

9. Post-traumatic Stress Disorder and Healing From the War, Ray Scurfield

12. The Soundtrack of Vietnam, Kim Herzinger

13. The Legacy of the Vietnam War for the U.S. Army, Jim Willbanks

14. Iraq as "The Good War" as Opposed to Vietnam, The Bad War, Lloyd Gardner

Andrew A. Wiest is Professor of History and Director of International Studies at The University of Southern Mississippi. He is the author of Vietnam’s Forgotten Army: Heroism and Betrayal in the ARVN.

Mary Kathryn Barbier is Assistant Profesor of History at Mississippi State University. She is the author of D-Day Deception: Operation Fortitude and the Normandy Invasion.

Glenn Robins is Associate Professor of History at Georgia Southwestern University. He is the author of The Bishop of the Old South: The Ministry and Civil War Legacy of Leonidas Polk.