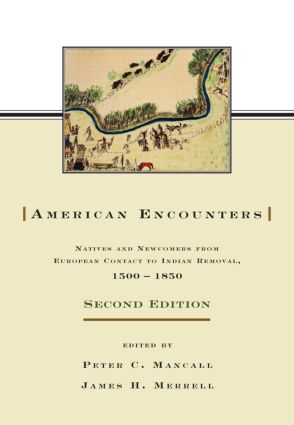 Newly expanded, the second edition of American Encounters provides the most comprehensive, up-to-date collection of scholarship on the Native American experience from European contact through the Removal Era. Retaining the hallmark essays from the celebrated first edition, the second edition contains thirteen new essays, emphasizing the most recent, noteworthy areas of inquiry, including gender relations, slavery and captivity, and the effects of Christianity on the course of native history. With each essay prefaced by helpful headnotes that highlight key concepts and draw connections among the essays, plus an expansive 'Further Readings' section, the second edition of American Encounters is an indispensable volume for both professors and students of early American history.

"…the authors emphasize the creativity of many persons in many Indian societies in dealing with the opportunities as well as the problems of often catastrophic intersocial exchange. [American Encounters's] selection of classics well repays the energetic reader." -- Journal of the Early Republic

". . . beautifully presented volume . . .appeal[s] to anyone interested in the strides forward Native American history has taken in the past generation, and it would serve as an excellent textbook for upper-division undergraduate courses in colonial history of Native American studies." -- Military History

"A collection of 25 outstanding articles…conveniently consolidates important scholarship that the nonspecialist may overlook…Highly recommended for public libraries and essential for academic libraries with Native American collections." -- Library Journal

"This carefully constructed set of essays showcases the work of a generation of historians who have raised the study of Native Americans to an entirely new plane. By taking a continent-wide approach, the editors have given students the opportunity to plumb the myriad experiences arising out of 300 years of Indian-European encounters." -- Gary B. Nash, UCLA

"A stunning collection that encompasses--and organizes--the depth and diversity of the very best recent writing on Indian-European relations, American Encounters is tailor-made for both classroom use and scholarly reference." -- Philip Deloria, University of Colorado

"The issues and approaches outlined in these writings will introduce students to the diversity and complexity of colonial encounters and cultural interactions from Canada to California across more than three centuries…An impressive array of essays representing the best literature in the ethnohistory of early America." -- Colin G. Calloway, Professor of History and Native American Studies, Dartmouth College

"Coming to grips with the complexity of 'the Native American experience' in the early period of European settlement and expansion in North America is a daunting challenge to students and instructors alike. Happily, this diverse collection of innovative and insightful essays illuminates a great many dimensions of that experience. It will help us all grasp the depth and variety of this fascinating and important subject." -- Frederick E. Hoxie, University of Illinois, Urbana-Champaign

"This collection of thought-provoking essays reflects the cutting-edge of scholarship in Native American history. The volume should become a standard text in any course that focuses upon Native American history in the ante-bellum period. The essays discuss many of the primary issues which have delineated scholarship in this field, and they are written by respected scholars. They should generate considerable classroom discussion. Highly recommended." -- R. David Edmunds, Watson Professor of American History, University of Texas at Dallas

"This collection of articles adds a much needed dimension to the study of Native Americans. Whereas much of the historiography of the United States treats Indians as mere subjects of conquest, this work demonstrates that they usually possessed a degree of agency far in excess of that normally assumed. The articles also add depth and scope to the study of Native Americans as well as the United States as a whole by depicting American existence both before the arrival of Columbus and beyond the periphery of white settlement and expansion." -- American Studies in Scandinavia David Harding, University of Aarhus

Peter C. Mancall is Professor of History and Anthropology at the University of Southern California and Director of the USC-Huntington Early Modern Studies Institute. He is the author of several books, including Deadly Medicine: Indians and Alcohol in Early America and Hakluyt’s Promise: An Elizabethan’s Obsession for an English America.

James H. Merrell, the Lucy Maynard Salmon Professor of History at Vassar College, is the author of the Bancroft Prize-winning books The Indians' New World: Catawbas and Their Neighbors From European Contact through the Era of Removal and Into the American Woods: Negotiators on the Pennsylvania Frontier.