American Exceptionalism and the Remains of Race
Multicultural Exorcisms 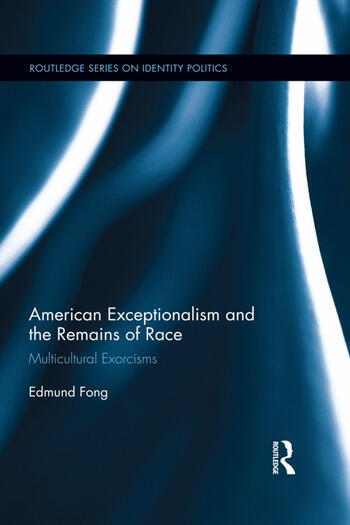 American Exceptionalism and the Remains of Race: Multicultural Exorcisms

In contemporary American political culture, claims of American exceptionalism and anxieties over its prospects have resurged as an overarching theme in national political discourse. Yet never very far from such debates lie animating fears associated with race. Fears about the loss of national unity and trust often draw attention to looming changes in the racial demographics of the body politic. Lost amid these debates are often the more complex legacies of racial hybridity. Anxieties over the disintegration of the fabric of American national identity likewise forget not just how they echo past fears of subversive racial and cultural difference, but also exorcise as well the changing nature of work and social interaction.

By situating contemporary discourse on cultural pluralism within the larger frame of American history, this book yields insight into the production of hegemonic forms of American exceptionalism and how race continues to haunt the contours of American national identity.

1. Liberal Multiculturalism and the Remains of Race. 2. The American Exception: The Politics of Recognition and Individual Autonomy. 3. Exceptional Remains: Cosmopolitanism’s Province in the American Imagination. 4. In Defense of Women: The Clash of American Exceptionalism and the Cultural Defense. 5. Recognition vs. Redistribution: The Uncanny Compensations of Culture over Class. 6 Remembering the Remains of Race

Edmund Fong is Assistant Professor of Political Science and Ethnic Studies at the University of Utah. His research interests occupy the nexus between critical race studies, American political thought and development, and contemporary political theory.

"[A] challenging, intriguing work that explores a necessary and essential part of American political thought... Summing Up: Highly recommended."

"This is the most profound – and the most elegantly written – meditation on the historical genealogy, constitutive difficulties, and vexed political meanings of the cluster of ideas and practices that go under the sign of multi-culturalism.  By relating multi-culturalism not only to liberalism in the abstract, but also to the knot formed by American exceptionalism and its disavowed alterity, Edmund Fong is able to explore not only the dissimulation and limitations,  but also the value and the challenges, of efforts to conceive cultural difference in politically generative ways. In prose that is keenly incisive, finely nuanced, and rigorously argued, Fong helps critics of liberal individualism and of American nationalism get beyond the reactive politics of merely remembering of alterity, to instead think creatively about how to forge emergent political possibilities out of the resistant residues of our vexed history."

"Edmund Fong argues passionately and eloquently that the dream of optimistic American exceptionalism and the nightmare of racial hierarchy are not opposing forces. Rather, their codependent relationship has persisted throughout and shaped American history, rendering them inseparable.  Race – even after its elimination as a structural feature of state institutions – has thus remained as a residual factor that silently shapes contemporary initiatives around multiculturalism and pluralism. Casting a critical eye on how triumphal memorializations of racial struggle strip away any potential for radical transformation, Fong calls for a deeper consideration of how racial ordering has always provided the foundation for America’s liberal ideals. A pathbreaking contribution to American political thought!"