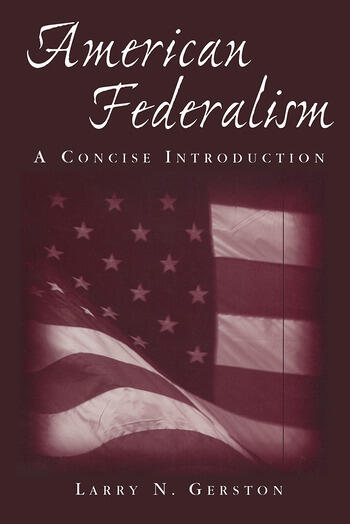 Understanding federalism - the form of political organization that unites separate polities within an overarching political system so that all maintain their political integrity - is central to the study of democratic government in the United States. Yet, many political scientists treat federalism as a set of abstract principles or a maze of budgetary transfers with little connection to real political life. This concise and engaging book boils the discussion down to its essence: federalism is about power, specifically the tug for power among and within the various levels of government. Author Larry N. Gerston examines the historical and philosophical underpinnings of federalism; the various "change events" that have been involved in defining America's unique set of federal principles over time; and the vertical, horizontal, and international dimensions of federalism in the United States today. The result is a book examining the ways in which institutional political power is both diffused and concentrated in the United States.

Part I. Creating a New Nation; 1. The Great Political Experiment; Defining Federalism and Organized Power in the "First New Nation"; * Endless Nuances; * The Four Characteristics of Federalism; * Fluidity and Continuity; * Follow the Bouncing Ball - The Uncertainties of Federalism; * Outcomes of Federalism; * Looking Ahead; 2. Reordering the Rules on Power and Governance; Questioning the Traditional Rules on Power and Governance; * New Theories and the Old Regime: Sowing the Seeds of Change; * The Articles of Confederation - First Effort at Self-Governance; * The Constitutional Convention - Second Effort at Self-Governance; * From the Past to the Present; Part II. Organizing a Federal System of Government; 3. The Appeal of Tradition; Tradition: The Conservative Ethic in America; * To Trust or Not to Trust the People - Conflicting Themes; * The Constitution: Assigned Powers and Early Interpretations; * Pitting Liberty Against Equality?; * Tradition, Yes, But What Tradition?; 4. Institutional Change Agents: Political Wellsprings; The Courts as Change Agents; * The President as a Change Agent; * Congress as a Change Agent; * National Institutions on the March; 5. Informal Pressures on the Power Flow; Political Parties; * Interest Groups; * Bureaucracy: Pushing From the Periphery of Power; * Public Opinion; * Informal Pressures: Ambiguous but Real; Part III. The Dimensions of Modern Federalism; 6. Vertical Federalism; National/State Relations; * National/Local Federalism; * State/Local Relations; * National/Private Sector Relations; * Vertical Federalism in Perspective; 7. Horizontal Federalism: Arrangements Among the States; State Political Cultures in the Federal Framework; * Public Opinion and Policy Differences; * State-to-State Competition; * Regional Cooperation; * Horizontal Federalism in the Twenty-first Century; 8. The International Dimension of Federalism; The Many Faces of Globalization; * Immigration; * Security; * International Dimensions in a Domestic Context; Part IV. Continuity and Change; 9. Explaining Federalism in the Twenty-first Century; Problem-Solving in a Defined Political Structure; * Emerging Themes, New Directions, Unanswered Questions; * The Future of American Federalism.