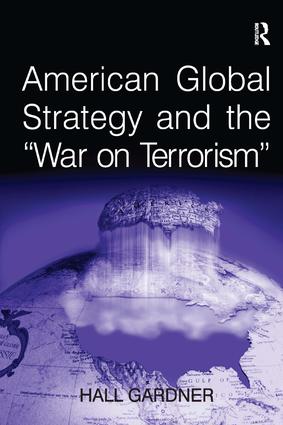 American Global Strategy and the 'War on Terrorism'

Contemporary international events, and indeed even the US presidential election, demonstrate the continuing need for debate and discourse over the direction and emphases of US foreign policy. Following the success of the original hardback publication, this revised and updated paperback re-conceptualizes the 'war on terrorism' and analyzes the nature of American domestic and international policy-making within the context of historical and structural constraints upon US policy. American Global Strategy and the 'War on Terrorism' addresses a wide range of themes that are crucial to understanding the 9/11 crisis and to formulating an affective American and global foreign and security policy to deal with that crisis. This study should be read by contemporary policy makers and scholars of foreign policy.

'…the book provides an interesting and informative analysis of strategic decisions made by the US in the period after the Second World War, for which Gardner should be commended.' Political Studies Review Reviews of the hardback edition: 'A truly remarkable book. Few if any other volumes provide such an encompassing overview of the most troubling issues that the world faces in the wake of the Cold War's end and the 2001 attack on the United States homeland. Neither neo-realist nor neo-con, just straightforward, powerful analysis.' Amitai Etzioni, author of From Empire to Community: A New Approach to International Relations 'A provocative and scholarly book that deserves a wide audience…No reader will find it possible to agree with every point argued forcefully by the author, but will not fail to gain…from the author's insights.' Simon Serfaty, Center for Strategic & International Studies, USA 'In his latest book…Gardner sketches the outlines of a new world order in which the US plays a more multilateral role. His views may be deemed 'too idealistic' and not be shared by protagonists of a unilateral approach in US foreign policy, but they are provocative and highly interesting and, as always, based on deep insights and a broad and detailed historical knowledge.' Marcel H. Van Herpen, Cicero Foundation, The Netherlands '…a tightly written, well-supported, extensively documented analysis of the US grand strategy to deal with the international threat of terrorism…A series of significant conclusions is proffered by the author…Highly recommended.' Choice '…the book will provide an interesting and thought-provoking read for those who - armed with a solid previous knowledge of American foreign policy - want to engage in an all-encompassing overview of the crucial security issues facing the world today.' The International Spectator '…one of the most interesting and creative volumes among the recent plethora of books on American grand s

Contents: Preface; Introduction: labors of Hercules without end in sight; Reflections upon the 11 September attacks and 'pre-emptive' war in Iraq; The roots of American neo-conservatism: neo-timocrats or moralizing politicians?; The question of State and anti-State 'terrorism': who is 'terrorizing' whom?; The risks of nuclear proliferation; Manipulating US global power: Pakistan, 'war on terrorism' and strategic leveraging; The global ramifications of American military expansionism; 'Clash of democracies' or new global concert?; Transcending the international disequilibrium; Selected bibliography; Index.

Hall Gardner is Professor and Chair of the International Affairs Department of the American University of Paris, France.