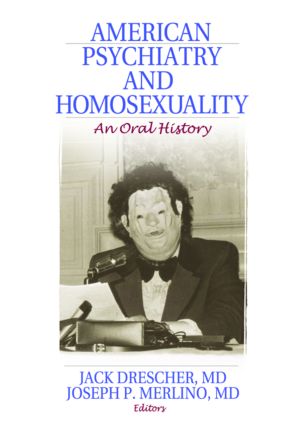 Through the personal accounts of those who were there, American Psychiatry and Homosexuality: An Oral History examines the 1973 decision by the American Psychiatric Association (APA) to remove homosexuality from its diagnostic and statistical manual of mental disorders (DSM). This unique book includes candid one-on-one interviews with key mental health professionals who played a role in the APA’s decision, those who helped organize gay, lesbian, and bisexual psychiatrists after the decision, and others who have made significant contributions in this area within the mental health field.

American Psychiatry and Homosexuality presents an insider’s view of how homosexuality was removed from the DSM, the gradual organization of gay and lesbian psychiatrists within the APA, and the eventual formation of the APA-allied Association of Gay & Lesbian Psychiatrists (AGLP). The book profiles 17 individuals, both straight and gay, who made important contributions to organized psychiatry and the mental health needs of lesbian and gay patients, and illustrates the role that gay and lesbian psychiatrists would later play in the mental health field when they no longer had to hide their identities.

Individuals profiled in American Psychiatry and Homosexuality include:

American Psychiatry and Homosexuality presents the personal, behind-the-scenes accounts of a major historical event in psychiatry and medicine and of a decision that has affected society and culture ever since. This is an essential resource for mental health educators, supervisors, and professionals; historians; and LGBT readers in general.