American Public Opinion toward Israel
From Consensus to Divide 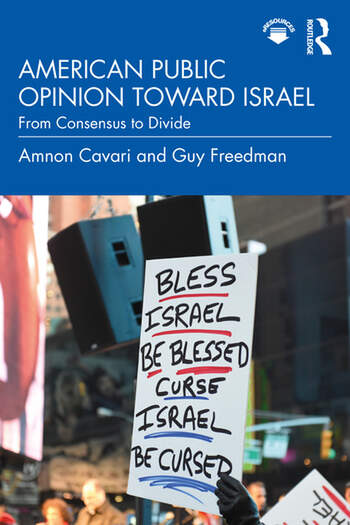 American Public Opinion toward Israel: From Consensus to Divide

This new book examines trends in American public opinion about Israel in over 75 years, from 1944 to 2019. Analyzing data from hundreds of surveys in jargon-free writing, the authors show that public support for Israel has seen a dramatic shift toward increased division between partisan and select demographic groups, elaborating on the implications that this important change may have for the countries’ special relationship. Scholars and students of American foreign policy, public opinion, Middle East politics, and international relations, as well as policy analysts, policy makers, journalists, and anyone interested in American policy toward Israel will want to read this book.

Chapter 3: Attitudes about Israel and other Issues

Amnon Cavari is Assistant Professor and head of the American Public Opinion toward Israel (APOI) project at the Lauder School of Government, Diplomacy and Strategy at the Interdisciplinary Center (IDC), Herzliya, Israel. He received his PhD from the University of Wisconsin-Madison. His research focuses on the interrelationship between elite actions and mass attitudes in the United States and Israel.

is a graduate student at the University of Texas at Austin, and is the manager of the American Public Opinion toward Israel (APOI) project at the Interdisciplinary Center (IDC), Herzliya, Israel. His research interests are in American public opinion and public policy.

This is a first rate study of the evolution of American attitudes toward Israel since World War Two. Using quantitative survey data, the authors convincingly argue that Israel, which at one time had  strong bipartisan support in the United States, has now become a partisan issue in US politics.

The idea that US Middle East policy has been hijacked by a small cabal of Jews is disturbingly resilient. Scrutinizing decades of US survey data, Cavari and Freedman put that fiction to rest, demonstrating the large partisan divide over Israel that actually drives US policy. Unfortunately, the growth of hyper-partisanship in the US has been matched by partisan gridlock in Israel. Any hope for Middle East peace, therefore, must grapple with the thorny issue of ideologically driven partisanship.

Who would have thought, back in 1948, that Israel would come to occupy such a central place in American public opinion or that its most fervent American supporters would come to include Evangelical Christians as well as American Jews and to include proportionally more Republicans than Democrats? Amnon Cavari and Guy Freedman have conducted a sweeping, intelligent, and thoughtful review of American attitudes toward Israel from 1944 through 2019, looking at both changes over time and differences between segments of the American population. Their book will be of interest to, and a valuable resource for students of American public opinion and voting behavior, American foreign policy, and the relations, political and otherwise, between the U.S. and Israel

The first comprehensive book on American public opinion towards Israel since the end of the Cold War. Timely, and rigorous; a must read for anyone interested in the US-Israeli relationship.