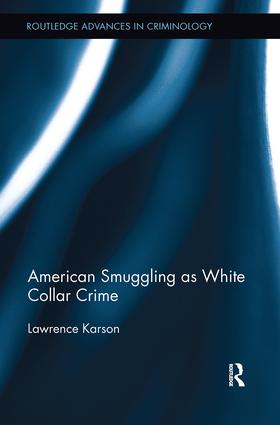 When Edwin Sutherland introduced the concept of white-collar crime, he referred to the respectable businessmen of his day who had, in the course of their occupations, violated the law whenever it was advantageous to do so. Yet since the founding of the American Republic, numerous otherwise respectable individuals had been involved in white-collar criminality. Using organized smuggling as an exemplar, this narrative history of American smuggling establishes that white-collar crime has always been an integral part of American history when conditions were favorable to violating the law.

This dark side of the American Dream originally exposed itself in colonial times with elite merchants of communities such as Boston trafficking contraband into the colonies. It again came to the forefront during the Embargo of 1809 and continued through the War of 1812, the Civil War, nineteenth century filibustering, the Mexican Revolution and Prohibition. The author also shows that the years of illegal opium trade with China by American merchants served as precursor to the later smuggling of opium into the United States.

The author confirms that each period of smuggling was a link in the continuing chain of white-collar crime in the 150 years prior to Sutherland’s assertion of corporate criminality.

"Karson presents an insightful and thoughtful exploration and review of smuggling beginning with the earliest history of British-American Colonial smuggling. He explains that the practice of smuggling developed along with, and shares space with the creation and development of the United States of America. In essence, Karson argues that smuggling has existed in symbiosis with the history and development of the country, its ideals, its laws, and its policies."

"American Smuggling as White Collar Crime… takes you on a historical journey which will command your attention as you begin to understand how Sutherland’s concept of white-collar crime and Merton’s idea of the American Dream can be used to explain how American and foreign business interests have been fundamental to American smuggling and to the genesis of white-collar crime. As the author touches upon relevant smuggling events (i.e., The New World; the Embargo of 1807-1809 and the War of 1812; the Civil War; the Mexican Revolution; Prohibition; the Drug Trade), the reader will thoroughly understand how this dark side of the American dream can be traced back to the colonial times. With the author’s penetrating analysis and insightful reasoning, you will undoubtedly reconsider your perspective on crime. A must read book.”

Lawrence Karson is currently an assistant professor of criminal justice at the University of Houston-Downtown. He retired from the United States Customs Service, where he served in the investigation division managing a fleet of aircraft and vessels used to pursue and apprehend drug traffickers smuggling contraband into the U.S. by air or sea.