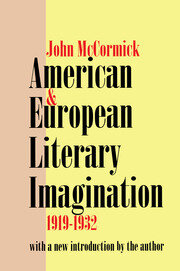 Western culture is composed of a subtle and complex mixture of influences: religious, philosophical, linguistic, political, social, and sociological. American culture is a particular strain, but unless European antecedents and contemporary leanings are duly noted, any resulting history is predestined to provincialism and distortion. In his account of American literature during the period 1919 to 1932, McCormick deals with the extraordinary work of artists who wrested imaginative order from a world in which the abyss was never out of sight.McCormick's volume is intended as a critical, rather than encyclopedic history of literature on both sides of the Atlantic between the end of World War I and the political and social crises that arose in the 1930s. Although he emphasizes American writers, the emergence of a vital and distinctly modern American literature is located in the cultural encounter with Europe and the rejection of national bias by the major figures of the period.McCormick deals with Gertrude Stein and the mythology of the "lost generation," the tensions and ambivalences of traditionalism and modernity in the work of Sherwood Anderson and F. Scott Fitzgerald, the effect and qualities of Hemingway's style as compared to that of Henry de Montherlant, and the provincial iconoclasm of Sinclair Lewis juxtaposed with the more telling satire of Italo Svevo. The formal innovations in the work of John Dos Passos, E.E. Cummings, and William Faulkner, the poetic revolution against cultural parochialism and genteel romanticism is given extensive consideration with regard to the work of T.S. Eliot, Ezra Pound, Wallace Stevens, William Carlos Williams, and Marianne Moore are also discussed. The concluding chapters discuss literary and social criticism and assess the influence of psychoanalysis, philosophical pragmatism, and radical historiography on the intellectual climate of the period.Teachers and students in English and American Literature, American History, and Comparative Literature, and the general reader interested in the writing of the period, may gain new insights from these valuations, devaluations, and re-evaluations.