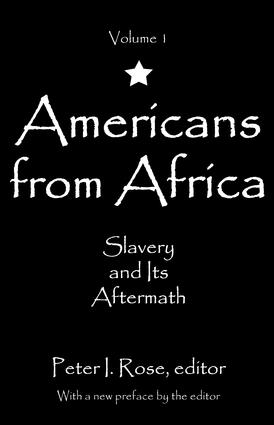 Slavery and its Aftermath, 1st Edition

Edited by Peter I. Rose

Americans from Africa seeks to convey varying perspectives on the "Black Experience" in the United States and its controversial history. This volume, Slavery and Its Aftermath, deals with four major issues: the extent of African influences on the lives of those enslaved and brought to America, beginning with an essay on "Africanisms in Everyday Life" by Melville J. Herskovits; the impact of slavery on personality and social structure, sometimes called "The Elkins Debate;" similarities and differences in life for African Americans in the South and in the North; and matters of community, class, and family, including the full text of the "Moynihan Report" and several pointed critiques.

In addition to the commentaries by and on the works of Herskovits, Elkins, and Daniel Patrick Moynihan, other contributors to Volume I include Kenneth B. Clark, Mina Caulfield Davis, E. Franklin Edwards, Eugene Genovese, Ulf Hannerz, Charles S. Johnson, Leroi Jones, and Charles Keil.

The second volume, Old Memories, New Moods, contains essays on the roots of black protest; the background and character of the Civil Rights Movement; interpretations of the impact and significance of Black Power, and varied views on changing self-images of being African American.

II. This Side of Jordan
Down Home and Up North
11 Uncle Remus and the Malevolent Rabbit
Bernard Wolfe
12 The Blackways of Kent
Hylan Lewis
13 Growing Up in the Black Belt: Ten Profiles
Charles S. Johnson
14 Harlem, My Harlem
Claude Brown
15 Urban Blues
Charles Keil
16 The Rhetoric of Soul
Ulf Hannerz