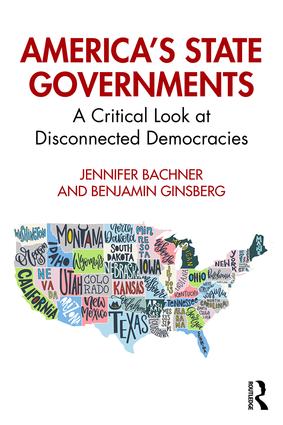 This timely and important new work takes a critical look at government in the American states and uses the underlying theme of disconnected democracies to illustrate the ways in which state government institutions—while democratic in form—lack the necessary firm connections with the citizens they should serve. The text illuminates three basic political problems of state governments: weak constitutional and institutional foundations; a lack of civic engagement; and long histories of public corruption unchecked by adequate ethics and conflict of interest rules. The authors base their critical look on an original national survey showing how little Americans know about state government. They also provide a careful analysis of state constitutions and illustrate how poorly many state governments serve their constituents. For students and citizens of state politics, the book concludes with a proposal aimed at civic literacy and action.

"States play enormously important roles in the American federal system. But this fascinating account shows how short they fall in delivering equal access to democratic participation, effective policy in the public interest, or even basic justice, for both political and structural reasons. Entertainingly written and full of new data and eye-opening examples, this book shows how low citizen interest and knowledge, declining media coverage, institutional weakness, and insufficient ethics protections result in interest group dominance, unrepresentative policies, and sometimes outright corruption. A must-read for anyone interested in the state (no pun intended) of American governance."

"The major strength of this textbook is that it offers the freshest take on state politics in literally decades."

"Rather than focus on comparing states with one another—the dominant approach in state politics research and texts—this book emphasizes their overall role in the federal system and their commonalities. This is an interesting and compelling approach."

Chapter 3: The States in the Federal System

Chapter 7: Corruption in the States

Chapter 8: Conclusion: What Is To Be Done?

Jennifer Bachner is Director of the Program in Data Analytics and Policy at Johns Hopkins University.

Benjamin Ginsberg is the David Bernstein Professor of Political Science and Chair of the Center for Advanced Governmental Studies at Johns Hopkins University.