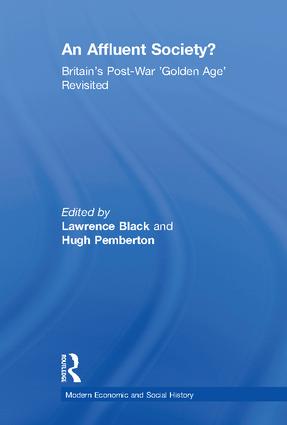 During an election speech in 1957 the Prime Minister, Harold Macmillan, famously remarked that 'most of our people have never had it so good'. Although taken out of context, this phrase soon came to epitomize the sense of increased affluence and social progress that was prevalent in Britain during the 1950s and 1960s. Yet, despite the recognition that Britain had moved away from an era of rationing and scarcity, to a new age of choice and plenty, there was simultaneously a parallel feeling that the nation was in decline and being economically outstripped by its international competitors. Whilst the study of Britain's postwar history is a well-trodden path, and the paradox of absolute growth versus relative decline much debated, it is here approached in a fresh and rewarding way. Rather than highlighting economic and industrial 'decline', this volume emphasizes the tremendous impact of rising affluence and consumerism on British society. It explores various expressions of affluence: new consumer goods; shifting social and cultural values; changes in popular expectations of policy; shifting popular political behaviour; changing attitudes of politicians towards the electorate; and the representation of affluence in popular culture and advertising. By focusing on the widespread cultural consequences of increasing levels of consumerism, emphasizing growth over decline and recognizing the rising standards of living enjoyed by most Britons, a new and intriguing window is opened on the complexities of this 'golden age'. Contrasting growing consumer expectations and demands against the anxieties of politicians and economists, this book offers all students of the period a new perspective from which to view post-imperial Britain and to question many conventional historical assumptions.

'Challenging familiar views of Britain's postwar decline, this provocative and wide-ranging collection focuses on growing affluence as a more appropriate framework for understanding political, social and economic developments during the 1950s and 1960s. Illuminating essays on political culture, consumerism, industrial design, youth marketing and economic policy offer a persuasive reinterpretation of Britain's new "golden age". This is a valuable scholarly addition to the literature on the period.' Fred M. Leventhal, Professor of History, Boston University 'An Affluent Society is an original contribution to British contemporary history. It is generally lively but in no way superficial, and deserves to be included on the reading lists of second- and third-year undergraduate courses on postwar British history. And it will also act as a useful secondary source for postgraduate students looking for background information and starting-points for dissertations or theses on social, economicand political developments in postwar Britain.' EH.NET '… an important and extremely useful contribution to the literature on post-war Britain. It will be essential reading for political, economic, social and cultural historians of Britain after 1945, as well as academics in other fields such as politics and sociology… accessible for both undergraduate and graduate students. All in all, An Affluent Society? pushes forward our understanding not only of affluence, but of post-war Britain itself.' English Historical Review

Modern Economic and Social History encourages the publication of scholarly monographs on aspects of modern economic and social history. While emphasis is placed on works embodying original research, the series also provides studies of a more general and thematic nature which offer a reappraisal or critical analysis of major issues of debate. Economic and social history has been a flourishing subject of scholarly study during recent decades. Not only has the volume of literature increased enormously but the range of interest in time, space and subject matter has broadened considerably so that today there are many sub-branches of the subject which have developed considerable status in their own right.