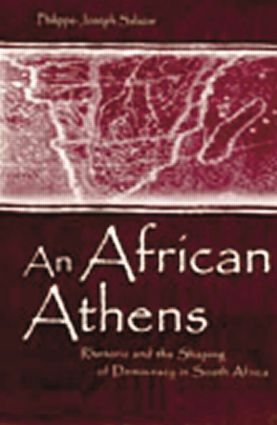 Rhetoric and the Shaping of Democracy in South Africa, 1st Edition

An African Athens offers an analysis of a new ecology of rhetoric--the reshaping of a nation into a democracy through rhetorical means. Author Philippe-Joseph Salazar provides a general view of issues as they have taken shape in the apartheid and post-apartheid South African experience, presenting the country as a remarkable stage for playing out the great themes of public deliberation and the rise of postmodern rhetorical democracy. Salazar's intimate vantage point focuses on the striking case of a democracy won at the negotiating table and also won every day in public deliberation.

This volume presents a full-scale rhetorical analysis of a democratic transformation in post-Cold War era, and provides a study of the demise of apartheid and post-apartheid from the standpoint of political and public rhetoric and communication. In doing so, it serves as a template for similar enquiries in the rhetorical study of emerging democracies.

Intended for readers engaged in the study of political and public rhetoric with an interest in how democracy takes shape, An African Athens highlights South Africa as a test case for global democracy, for rhetoric, and for the relevance of rhetoric studies in a postmodern democracy.

"…a compelling account of the complex, multilayered rhetorical activity of nation-building. Perhaps most importantly, An African Athens is an attempt to highlight what Salazar calls a 'a new political ecology of rhetoric,' an account of a democracy 'built on a sanguine belief in human rights in the fullest extent of the expression' that takes us beyond liberal accounts placing nation-building solely within the domain of the privileged. Because Salazar represents such rhetorical activity as a fluid, ever emerging process of public and popular deliberations, which situates Africa as sort of 'laboratory for democracy,' he succeeds in providing a context from which future rhetorical theories of nation-building can emerge and prosper. As such, this book promises to be of major interest to scholars of rhetoric (specifically the study of political and public rhetoric), social movements, and political scientists interested in the shaping and reshaping of democracies."