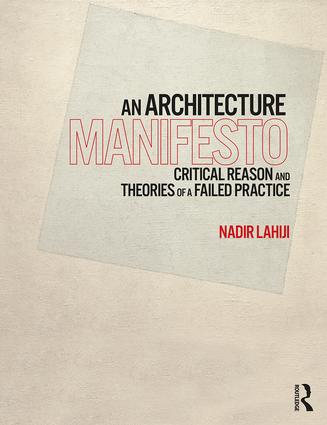 Critical Reason and Theories of a Failed Practice, 1st Edition

In this manifesto, the author takes a leap of faith. It is a faith in Lost Causes. He asserts that today, architectonic reason has fallen into ruins. As soon as architecture leaves the limits set to it by architectonic reason, no other path is open to it but the path to aestheticism. This is the wrong path contemporary architecture has taken. In its reduction to a pure aesthetic object, architecture negatively affects the human sensorium. Capitalist consumer society creates desires by generating ‘surplus-enjoyment’ for capitalist profit and contemporary architecture has become an instrument in generating this ‘surplus-enjoyment’, with fatal consequences.

This manifesto is thus both a critiqueand a work of theory. It is a siren, alarm, klaxon to the current status quo within architectural discourse and a timely response to the conditions of architecture today.

"An Architecture Manifesto is a path-breaking call for reclaiming the emancipatory project of the Enlightenment in architecture. Rather than contenting himself with further deconstructing or historicizing the loftiest aims of architecture, Nadir Lahiji embraces them in this manifesto. Simultaneously an apologetic assertion of the importance of theory and an insistence on the universal importance of architecture, An Architecture Manifesto is a must-read for anyone concerned with the space in which we exist—which is to say, for everyone." - Todd McGowan, University of Vermont

"A philosophical primer from one of the keenest, most demanding writers on the Anglo-American architectural scene today. A profound and bold interrogation of architecture’s role and responsibilities in the age of capitalist absolutism." - Libero Andreotti, Emeritus Professor of Architecture, Georgia Tech (Georgia Institute of Technology)

"A fierce defence of Big Ideas and Great Causes, Nadir Lahiji’s outstanding book is a call to action in the face of contemporary architectural hubris and complacency. Passionately making the case for an egalitarian right to shelter, An Architecture Manifesto is also a masterly critique of architecture’s current status as an agent of capitalist development. This is a book that invites comparison with many of the great revolutionary manifestos of the twentieth century." - David Cunningham, Institute for Modern and Contemporary Culture, University of Westminster

"'Try again. Fail again. Fail better.' This quote from Samuel Beckett is the guiding light for Nadir Lahiji’s passionate commitment to the practice of architecture. Adamant that the failure of the modernist emancipatory project does not constitute its death, he insists on the need to mine the 'Twentieth Century’s Architectural Project' for its unresolved but ever vital contradictions. Lahiji’s manifesto is unique for avoiding a projected view of the future and instead, a la Tafuri, insisting on the historical, philosophical, and psychoanalytic analysis of 20th century architecture to motivate the present. You won’t find a more committed critical theorist in our architectural ranks." - Peggy Deamer, Professor of Architecture, Yale University

"In the best tradition of the 20th century manifestos Nadir Lahiji’s An Architecture Manifesto is a book that presents a strong statement, a radical gesture, a break that aims at opening up a different future. In 1923 Mies van der Rohe, looking at the Berlin architecture of the time, famously said ‘These buildings are dishonest, stupid and insulting’. Almost a hundred years later Lahiji, looking at the bulk of the present architecture, continues in his footsteps by stating ‘These buildings are pornographic, garish, mendacious and hubristic’. He makes a passionate plea for a new assessment of the legacy of the Enlightenment and for the emancipatory potentials of the 20th century architecture which seems to have been forgotten in what he calls the architecture of Restoration in the service of the monarchy of the capital. Courageous and inspiring, this is a quintessential reading." - Professor Mladen Dolar, University of Ljubljana

"Situating architecture’s current condition squarely in relation to Late Capitalism, Lahiji’s timely manifesto is mobilized against the post-political, post-ideological doxa of its present predicament. As passionately engaged as it is philosophically erudite, we should heed his urgent call for the recovery of architectonic reason and the revival of utopian thought." - Douglas Spencer, Director of Graduate Education, Associate Professor, Department of Architecture, Iowa State University

1. Architecture, The ‘Restoration’, and This Manifesto. 2. Facing the Twentieth Century. 3. In Praise of the Failed Project. 4. Nihilism. 5. Nietzsche and the Architect. 6. Architectonics. 7. Universality of Reason. 8. Building and Aufhebung. 9. One Divides into Two. 10. End of Utopias. 11. The Emancipatory Hypothesis. 12. Universality and the Ethical Life of Building.

Nadir Lahiji is an architect and critical theorist. His recent books include Adventures with the Theory of the Baroque and French Philosophy (2016); the co-authored The Architecture of Phantasmagoria: Specters of the City (Routledge, 2017); the edited volume Can Architecture Be An Emancipatory Project? Dialogues on Architecture and the Left (2016); and the edited collection The Missed Encounter of Radical Philosophy with Architecture (2014).