An Encyclopedia of Swearing
The Social History of Oaths, Profanity, Foul Language, and Ethnic Slurs in the English-speaking World 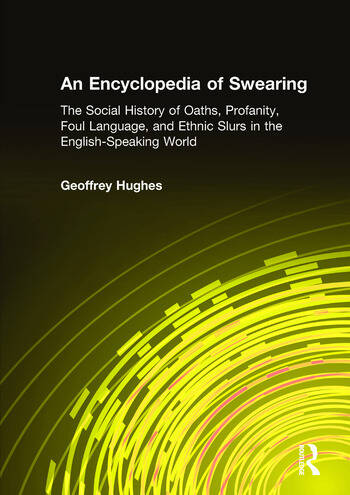 An Encyclopedia of Swearing: The Social History of Oaths, Profanity, Foul Language, and Ethnic Slurs in the English-speaking World

This is the only encyclopedia and social history of swearing and foul language in the English-speaking world. It covers the various social dynamics that generate swearing, foul language, and insults in the entire range of the English language. While the emphasis is on American and British English, the different major global varieties, such as Australian, Canadian, South African, and Caribbean English are also covered. A-Z entries cover the full range of swearing and foul language in English, including fascinating details on the history and origins of each term and the social context in which it found expression. Categories include blasphemy, obscenity, profanity, the categorization of women and races, and modal varieties, such as the ritual insults of Renaissance "flyting" and modern "sounding" or "playing the dozens." Entries cover the historical dimension of the language, from Anglo-Saxon heroic oaths and the surprising power of medieval profanity, to the strict censorship of the Renaissance and the vibrant, modern language of the streets. Social factors, such as stereotyping, xenophobia, and the dynamics of ethnic slurs, as well as age and gender differences in swearing are also addressed, along with the major taboo words and the complex and changing nature of religious, sexual, and racial taboos.

How can American unions survive in our increasingly globalized business environment? Historically, U.S. unions have looked inward for their membership. However, with the trend toward multinational corporations, free trade pacts, and dismantling of import barriers, organized labor has been losing ground in the United States. This book suggests that U.S. unions can look elsewhere to expand their role, by creating ties with workers and unions in other countries, and by including immigrant workers - who are growing in ever-increasing proportion in the United States - in their ranks. How can this be accomplished? Through "social movement unionism," which would change unions' orientation less toward the market and more toward social issues and rights. Unions in a Globalized Environment is divided into three parts. The first two parts examine union attempts a cross-border solidarity with workers and unions abroad, and unions' relations with immigrants. Expanding on these ideas, the third section explores the types of internal transformations needed to revitalize the flagging U.S. labor movement.