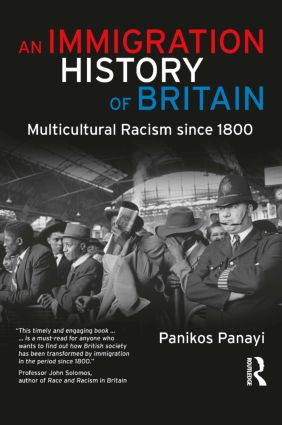 An Immigration History of Britain

Immigration, ethnicity, multiculturalism and racism have become part of daily discourse in Britain in recent decades – yet, far from being new, these phenomena have characterised British life since the 19th century. While the numbers of immigrants increased after the Second World War, groups such as the Irish, Germans and East European Jews have been arriving, settling and impacting on British society from the Victorian period onwards.

In this comprehensive and fascinating account, Panikos Panayi examines immigration as an ongoing process in which ethnic communities evolve as individuals choose whether to retain their ethnic identities and customs or to integrate and assimilate into wider British norms. Consequently, he tackles the contradictions in the history of immigration over the past two centuries: migration versus government control; migrant poverty versus social mobility; ethnic identity versus increasing Anglicisation; and, above all, racism versus multiculturalism.

Providing an important historical context to contemporary debates, and taking into account the complexity and variety of individual experiences over time, this book demonstrates that no simple approach or theory can summarise the migrant experience in Britain.

“This timely and engaging book, written by a leading authority on the subject, is a must-read for anyone who wants to find out how British society has been transformed by immigration in the period since 1800.”

Professor John Solomos, author of Race and Racism in Britain

“This is a brave and wide-ranging book that will challenge the reader to think about the nature of British society.”

Preface. List of illustrations. 1. A Country of Immigration? 2. Migration to Britain 3. Three Paths to Integration? Geography, Demography and Economics 4. Ethnicity, Identity and Britishness 5. Xenophobia and Racism 6. The Evolution of Multiculturalism 7. Conclusions, Contradictions and Continuities Bibliography. Index

Panikos Panayi is Professor of European History at De Montfort University and a leading authority on the history of immigration and ethnicity. His most recent book is the widely acclaimed Spicing Up Britain: The Multicultural History of British Food (2008, 2010).