An Intellectual History of Terror
War, Violence and the State 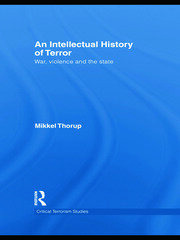 An Intellectual History of Terror: War, Violence and the State

This book investigates terrorism and anti-terrorism as related and interacting phenomena, undertaking a simultaneous reading of terrorist and statist ideologists in order to reconstruct the ‘deadly dialogue’ between them.

This work investigates an extensive array of violent phenomena and actors, trying to broaden the scope and ambition of the history of terrorism studies. It combines an extensive reading of state and terrorist discourse from various sources with theorizing of modernity’s political, institutional and ideological development, forms of violence, and its guiding images of self and other, order and disorder. Chapters explore groups of actors (terrorists, pirates, partisans, anarchists, Islamists, neo-Nazis, revolutionaries, soldiers, politicians, scholars) as well as a broad empirical source material, and combine them into a narrative of how our ideas and concepts of state, terrorism, order, disorder, territory, violence and others came about and influence the struggle between the modern state and its challengers. The main focus is on how the state and its challengers have conceptualized and legitimated themselves, defended their existence and, most importantly, their violence. In doing so, the book situates terrorism and anti-terrorism within modernity’s grander history of state, war, ideology and violence.

This book will be of much interest to students of critical terrorism studies, political violence, sociology, philosophy, and Security Studies/IR in genera

1. Introduction: To Terrorize and to Theorize  Part 1: Investigative Signposts  2. Killing Words: On Justifying Violence  3. The Violently Privileged: On the State  4. Beyond the Line: On Frontierlands  Part 2: Archive of Terrors  5. Terror as Fright: The Concept of Terror before the French Revolution  6. Terror as Policy: The Concept of Terror during the French Revolution  7. Terror as Crime: The Concept of Terror after the French Revolution  Part 3: Pirates and Terrorists  8. Pirates and Barbarians: the Barbary ‘Axis of Piracy’ and Western ‘Anti-Terror’-Campaigns  9. Enemy of Humanity: the Anti-Piracy Discourse in Present Day Anti-Terrorism  10. State Pirates: Warriors in the Maritime Frontierland  Part 4: States of Terror, States of Humanity  11. All Talk and No Security: the Securitist Critique of the Liberal Democracy’s Irresponsibility  12. The Humanitarian Sovereign: Cosmopolitan Warfare in the New Global Frontierland