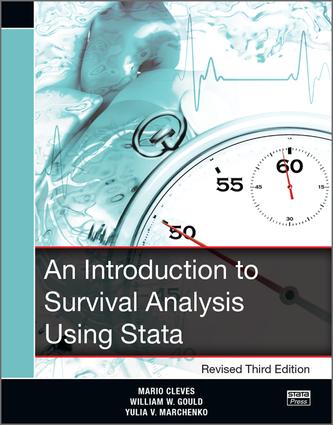 An Introduction to Survival Analysis Using Stata, Revised Third Edition is the ideal tutorial for professional data analysts who want to learn survival analysis for the first time or who are well versedin survival analysis but are not as dexterous in using Stata toanalyze survival data. This text also serves as a valuable reference to those readers who already have experience using Stata’s survival analysis routines.

Survival analysis is a field of its own that requires specialized data management and analysis procedures. To meet this requirement, Stata provides the st family of commands for organizing and summarizing survival data.

The first three chapters of the text cover basic theoretical concepts: hazard functions, cumulative hazard functions, and their interpretations; survivor functions; hazard models; and a comparison of nonparametric, semiparametric, and parametric methodologies. Chapter 4 deals with censoring and truncation. The next three chapters cover the formatting, manipulation, stsetting, and error checking involved in preparing survival data for analysis using Stata's st analysis commands. Chapter 8 covers nonparametric methods, including the Kaplan–Meier and Nelson–Aalen estimators and the various nonparametric tests for the equality of survival experience.

Chapters 9–11 discuss Cox regression and include various examples of fitting a Cox model, obtaining predictions, interpreting results, building models, model diagnostics, and regression with survey data. The next four chapters cover parametric models, which are fit using Stata's streg command. These chapters include detailed derivations of all six parametric models currently supported in Stata and methods for determining which model is appropriate, as well as information on stratification, obtaining predictions, and advanced topics such as frailty models. Chapter 16 is devoted to power and sample-size calculations for survival studies. The final chapter covers survival analysis in the presence of competing risks.

"This is an application-oriented introduction to survival analysis using Stata. The authors have focused on intuitions without getting into technical details. For example … the rather mysterious partial likelihood was elegantly illustrated with a small dataset and simple derivations for conditional probabilities. The book provides an excellent coverage of commonly used nonparametric, semiparametric, and parametric analyses of survival data, with ample application examples. The implementation of each survival approach has been carefully laid out in Stata syntax and real data analyses. Moreover, the material covered in the book is surprisingly comprehensive, including Coxmodels with time-varying covariates, shared frailty models, multiple imputations, and competing risk regression. Those topics are often encountered in practice but usually missing from an introductory book of survival analysis. The revised third edition has been updated to reflect the welcome additions in Stata 14 relative to previous versions. … The revised third edition provides not only an excellent tutorial to anyone who is interested in learning survival models with examples, but also an extremely handy reference to researchers who would like to perform survival analyses in Stata."

—Yu Cheng, University of Pittsburgh, in The American Statistician, April 2018

The problem of survival analysis

Describing the distribution of failure times

The survivor and hazard functions

A short lesson on dates

Purposes of the stset command

Syntax of the stset command

A survey of parametric regression models in Stata

Use of predict after streg

Accounting for withdrawal and accrual of subjects

Mario Cleves is Professor and the Biostatistics Section Chief in the Department of Pediatrics at the University of Arkansas for Medical Sciences.

William Gould is the president and head of development at StataCorp.

Yulia Marchenko is a senior statistician at StataCorp.