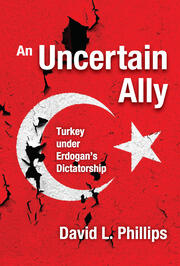 Under the rule of Recep Tayyip Erdogan Turkey has descended into a dictatorship, promotes the Islamist agenda, abuses human rights, limits freedom of expression in the press, and wages war against the Kurds. While Turkey has historically been important geopolitically, it has become an outlier in Europe and an uncertain ally of the United States.

An Uncertain Ally is a straightforward indictment of Erdogan. Drawing on inside sources in his Justice and Development Party (AKP) and the police, the book reveals corruption and money laundering schemes that benefitted Erdogan, his cronies, and family members. Erdogan has polarized Turkish society and created conditions that led to the coup attempt of July 2016. He has also deepened divisions by accusing Fethullah Gulen, an Islamic teacher in Pennsylvania, of establishing a parallel state and masterminding the coup attempt. Erdogan has seized on the failed coup to justify a witch hunt, arresting thousands and ordering the wholesale dismissal of alleged coup sympathizers. Rather than foster reconciliation, he pursued vendettas and turned Turkey into a gulag.

An Uncertain Ally exposes Turkey’s ties to jihadists in Syria and the Islamic State, questioning its suitability as a NATO member. Under Erdogan, Turkey faces a dark future that poses a danger to the region and internationally.

"A compelling view of Erdogan's Turkey, chronicling the erosion of democracy and the heavy-handed crackdown after the coup of July 2016."

—Ambassador Morton I. Abramowitz, former US Ambassador to Turkey

"An Uncertain Ally is a compelling political history that chronicles Turkey's abuses against human rights, killing of Kurds, and insidious support for Islamic extremists. It convincingly advocates for a more reality-based, honest approach to relations with Turkey, ending exceptionalism."

"David Phillips offers recommendations, certainly worthy of Washington DC's consideration, for a broadening of collaboration between the United States and Turkey in such fields as counterterrorism, trade, energy and human rights. With American persuasion, this might serve to render relief for Turkey' s diverse population from the harsh authoritarian and radical policies of President Erdogan."

‘At this moment of tumultuous transition in the presidency of the United States, nuanced and informed understandings of global politics are timely and more important than ever to read. An Uncertain Ally by David Phillips, is a welcomed addition to the literature and an important corrective to many popular misunderstandings of Turkey today. […] As a reader I was engaged from beginning to end, and the suspense of the real world events and the protagonist of this story makes it all the more compelling.’

"To him, Erdogan is a dictator who sees himself as the new Ataturk, with a mission to remodel the Turkish state and Turkish society in the image of its glorious Ottoman past. As Phillips describes it, Erdogan’s authoritarian personality, his ‘inner Stalin’ (p. 177), comes to the fore whenever he is under pressure."