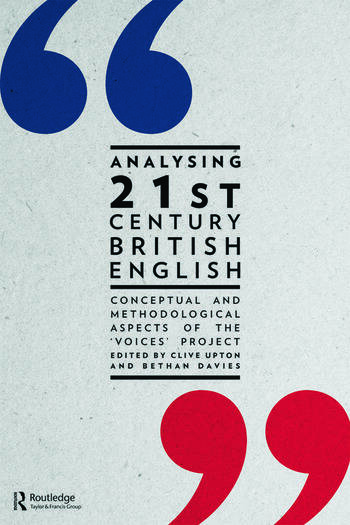 The Voices project of the British Broadcasting Corporation, a recent high-profile media investigation, gathered contemporary English dialect samples from all over the UK and invited contributions from the public to a dedicated website. This book explores both issues of ideology and representation behind the media project and uses to which the emerging data can be put in the study of language variation and change.

Two lead-in chapters, written from the complementary perspectives of a broadcast media specialist, Simon Elmes, and an academic linguist, David Crystal, set the project in the BBC’s historical, social, and linguistic contexts. Following these, authorities in a range of specialisms concerned with uses and representations of language varieties address various aspects of the project’s potential, in three broad sections:

An interactive companion website provides the means to access, explore, and make use of raw linguistic data, along with interpretive maps created from it, all accompanied by full explanations.

brings together key research and is essential reading for advanced undergraduate students, postgraduate students and researchers working in the areas of language variation, dialect and sociolinguistics.

Clive Upton is Emeritus Professor of Modern English Language at the University of Leeds, and was academic consultant to the BBC Voices project.

Bethan Davies is lecturer in Linguistics at the University of Leeds.

'From its first chapter, on the background of Voices at the BBC, to its last chapter, on statistical mapping of Voices data, this book consistently shows how we can add state-of-the-art academic analyses to the public success of the BBC Voices project.'

'Analysing 21st Century British English shows even more than we thought just what a rich mine of information the BBC Voices project is. Here we can find computer mappings of dialect areas based on the mass of regional vocabulary collected, alongside reflections on the project by both BBC journalists and linguists. This is a unique and innovative volume with wide appeal to linguists and media studies specialists alike - but lay readers will find much to entice them, too.'