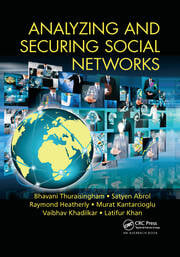 The authors explore security and privacy issues for social media systems, analyze such systems, and discuss prototypes they have developed for social media systems whose data are represented using semantic web technologies. These experimental systems have been developed at The University of Texas at Dallas. The material in this book, together with the numerous references listed in each chapter, have been used for a graduate-level course at The University of Texas at Dallas on analyzing and securing social media. Several experimental systems developed by graduate students are also provided.

Dr. Bhavani Thuraisingham is the Louis A. Beecherl, Jr. distinguished professor of computer science and the executive director of the Cyber Security Research and Education Institute at the University of Texas at Dallas. She has 35 years of work experience in commercial industry (Honeywell), federally funded research and development center (MITRE), government (NSF) and academia. Dr. Thuraisingham has conducted research in cyber security for thirty years and specializes in applying data analytics for cyber security. Her work has resulted in over 100 keynote addresses, 120 journal papers, 300 conference papers, 15 books, and 8 patents.

is a professor of computer science at The University of Texas at Dallas. He is recipient of an NSF CAREER award and a Purdue CERIAS Diamond Award for academic excellence. Currently, he is a visiting scholar at Harvard's Data Privacy Lab. His research has been supported by awards from NSF, AFOSR, ONR, NSA, and NIH. He has published over 150 peer-reviewed papers. Also, his work has been covered by media outlets such as Boston Globe and ABC News, among others, and has received three best-paper awards. He is a senior member of both ACM and IEEE.

is a full professor (tenured) in the computer science department at the University of Texas at Dallas, where he has been teaching and conducting research since September 2000. He earned his PhD and MS degrees in computer science from the University of Southern California in August of 2000 and December of 1996 respectively. He has received prestigious awards, including the IEEE Technical Achievement Award for Intelligence and Security Informatics. He has given many keynote addresses, such as at the IEEE International Conference on Tools with Artificial Intelligence ICTAI 2010 in Arras, France.

completed his MS degree at Lamar University, and after working as a systems administrator for a few years, joined UTD for his PhD. He conducted research in secure semantic web, assured information sharing, and secure social networking, and completed his PhD in 2013. He received a scholarship from the CSI for his outstanding contributions. He has published numerous papers in top tier venues and is currently employed at NutraSpace in Dallas.

is a senior member of the technical staff at VMware, San Francisco Bay Area. He was a research assistant at the University of Texas at Dallas from August 2008 to May 2013, where he was associated with data mining and machine learning in online social networks. From May 2012 to August 2012, he worked at VMware in Palo Alto, CA, where he designed and implemented modules for storage, indexing, and querying of performance data. He also built pattern recognition modules for detecting performance regression, outlier detection, step detection, and correlation calculation.

is lead data scientist at SHYFT Analytics, in the Greater Boston Area, where he is responsible for researching and implementing statistical tools for clinical and pharmaceutical analytical packages. He also is responsible for coordinating with the software development team to ensure that statistical components function within overall product offerings. Prior to that, he was a postdoctoral fellow at Vanderbilt University from August 2011 to July 2015, conducting research in electronic medical-record sharing and privacy, primarily for the eMERGE Consortium.