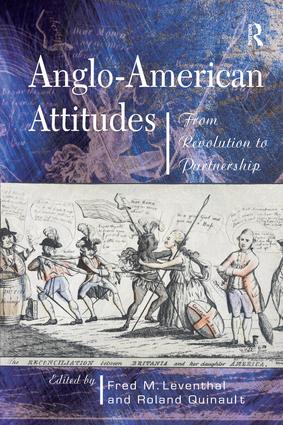 From Revolution to Partnership, 1st Edition

Anglo-American Attitudes is a pioneering study of Anglo-American connections in their widest sense. Previous studies of Anglo-American relations have focused narrowly on official government-to-government contacts rather than on other kinds of less formal links. This book redresses that imbalance by examining not only diplomatic relations, but also a wide variety of social, economic, intellectual and cultural connections. It is also the first study which examines Anglo-American relations over not just the few decades of the ’special relationship', but over the whole period since the American Revolution. The book opens up many new themes and perspectives which illuminate the evolution of bilateral relations, mutual perceptions and the comparative development of both nations. Anglo-American Attitudes will be invaluable not only for students of British and American history, but also for anyone who wants to understand the complex nature of an association which has played a key role in the evolution of the modern world.

’Readers will learn more about the Anglo-American relationship from this excellent collection than from any number of traditional diplomatic studies.’ Times Literary Supplement '… the essays speak engagingly to graduate studens and professionals in the field, reflect a high quality of scholarship and offer useful insights and provocative intrepretations apropos the "special relationship".' Choice '… a valuable contribution to the study of Anglo-American relations in the last 250 years.' Albion '… it includes material from some of the most erudite historians of the moment writing on Anglo-American matters… The papers in the volume are consistently provocative, mixing discussion of politics (…) with economics (…) and there are some terrific papers on issues of Anglo-American culture and mutual perceptions…' Twentieth Century British History 'The excellent essays in Leventhal and Quinault's collection will be read with great profit by all who are interested in understanding this corner of international history.' Contemporary British History 'The intrinsic quality of (…) these essays is very high… worthwhile and well edited… outstanding. This book should be read (…) by all who are seriously interested in the history of Anglo-American relations.' Journal of American Studies